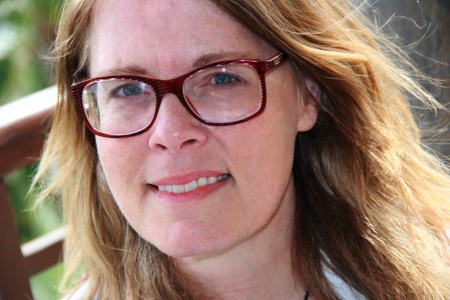 It's going on 40 years since Debby Goldsberry left the UI, in mid-degree, to launch the Cannabis Action Network.

But from time to time, she still checks in on her favorite campus spot.

“Even today," she says from Oakland, Calif., "I cross the Quad regularly in my sleep, dipping into the Union or passing through to get various places in my dreamscape. It is beautiful.”

That's the way she'll always remember the place she frequented as an undergrad in the mid-'80s.

“As soon as I moved from Carr Hall to an apartment, I got a bike and a Quad dog, Cassidy. She would beg bites of lunch from other students, while I studied in the sunshine. There were always a few other dogs running around, ready to play and distract us all from the days work.

“I remember a lot of long, cold walks across the Quad, going from one big campus building to another, or making the trip from Carr Hall to Green Street for food or fun. I surely never got used to the indignity of a slippery fall on winter Quad sidewalks, but would freely laughed if any of my friends went down for the same.

“Most importantly, I learned the importance of free speech and protest on the Quad. We set up cages, and imprisoned ourselves to highlight Amnesty International’s message about political prisoners. We registered voters, collected signatures on petitions, and signed people up for our various student groups. We gathered for events, drawing attention to important causes, and honing the skills we need serve as individual custodians of our democracy.

“Personally, my cause was, and is, the legalization of marijuana. I joined the campus chapter of the National Organization for the Reform of Marijuana Laws at a booth behind the Union, and met Chef Ra, the beloved High Times columnist, there.

"When the police cracked down on the annual Hash Wednesday smoke-in on the Quad in 1988, I helped organize a legalization teach-in the next year in its place. National leaders of the fledgling anti-prohibition movement converged on the Quad that day, joining with us to form the Hemp Tour movement. This was a pivotal moment in the history of drug law reform, where advocates began organizing together to take determined and specific actions against the War on Drugs.

"I have been involved ever since, organizing for change and now directing medical cannabis dispensaries in California since 1999."