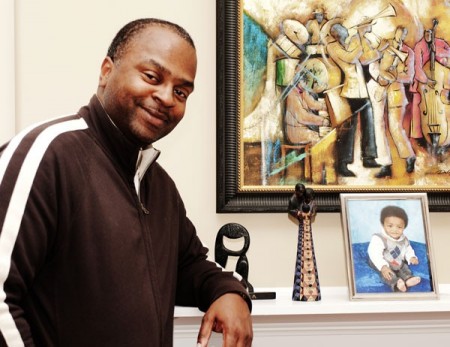 A short story about life on campus in the mid-’90s, by University of Chicago writing instructor and award-winning Nigerian-American novelist Bayo Ojikutu (BA ’96, political science/history):

“I wonder whether the all-night computer lab in the basement of Altgeld Hall still exists. Twenty-five years ago, right before the full-on holiday season in the Year of OJ, that lab was the only 24-hour PC workstation space that I could find on our great and sprawling campus that was accessible to an upperclassman who hadn’t lived in the dorms since George Bush I was still U.S. President.

“I do not recall how I found that underground lab — perhaps someone referred me? Was there a student services call center for such desperate queries back then? A 411 hotline maybe, for GenX slackers who had three 20-page papers to start in the Sunday night quiet? Start and finish before the semester ended on Wednesday and all hope was lost for the wayward Illini? Before all that time went to waste? 411? What is that, you say? Indeed.

“I was not a math guy myself. I otherwise recall Altgeld Hall as the funny building just aside the postal service window in Henry. Does that still exist? Egad, those lines stretched all the way out to the sidewalk at Wright Street around that time of year, when the ’Paign turned cold, hard and wet as solstice approached Central I-L-.

“Oh, yes, I had taken a calculus course freshman year in Altgeld. The TA’s instruction sounded like Steven Wright’s DJ voice in ‘Reservoir Dogs,’ while he looked like the dudes in ‘Wayne’s World’ — both of them fused as one in their mother’s basement. I do not remember whether either movie had been released by my freshman year. If they had, I’d probably told that grad student that he reminded me of those comedians, after a quiz.

“He is surely a tenured analytics prof at a fine college or university in New Mexico now, with a consultancy on the side providing droll advice for semiconductor and drone bomb manufacturers. I did not do particularly well in freshman calc.

“I was a political science and history guy. There were no all-night computer labs in Gregory nor Lincoln halls. No labs open at any hour at that end of the Quad with stations occupied by whatever- gamers-were-called-when-’gaming’-was-just-playing-video-games, beta test blasting away on first-person shooters set against the mostly black desert of MS-DOS screens; nor fellows in T-shirts and clogs, as if Altgeld was their residence hall, whispering over keyboards of something called ‘webmail,’ 10 years before Gmail launched and long before I’d ever heard of AOL or the tech bubble; or the guy with the linty beard and wire rim glasses ‘macking down’ the young co-ed with campus legends of the missile silos dug down beneath the east side of the Quad and what would come of them now that the Cold War was over, definitely over.

“Storage for soy bean surplus? What about the lingering radioactivity? Oh, yes, that. Telemarketing call centers?”