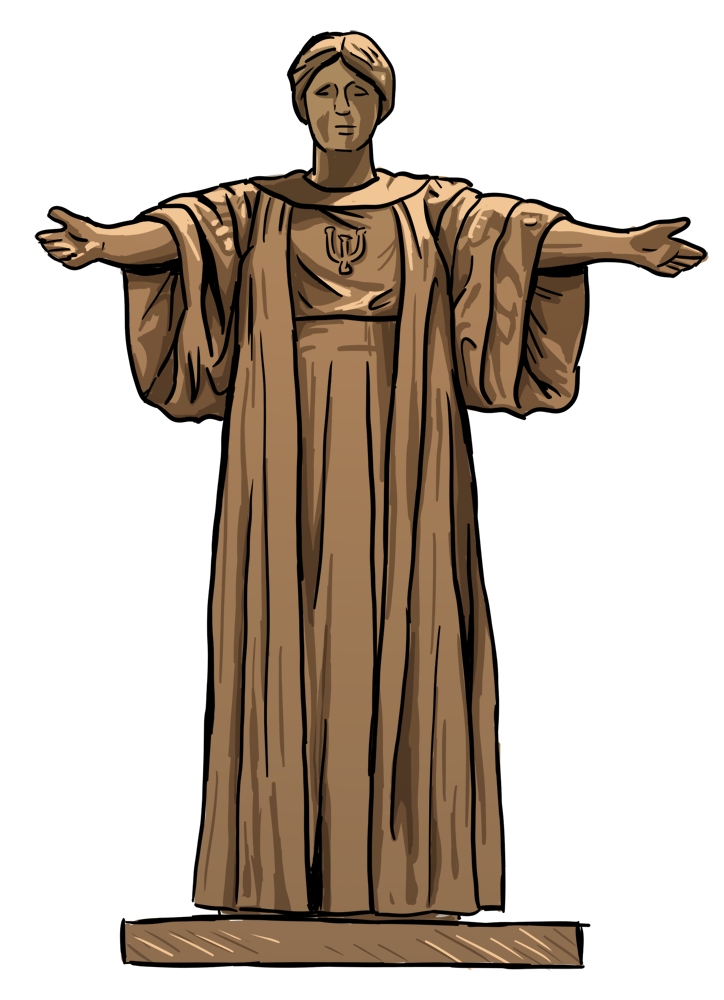 “It’s 12 p.m.,” she says. “The intersection of Green and South Wright streets is bustling with activity — students running between classes, squirrels hopping in snow and cold winds gusting through Green Street.

“All of a sudden, the majestic bell tower next to the Alma Mater commences its noontime chime — ‘Joyful Joyful We Adore Thee’ — and orchestrates chaos into music.

“I have crossed this intersection several times, and even today I can replay this scene before my eyes.”

The Alma Mater is also where ...

— Fifty years ago, Global Gun Safety Gary Witt can confess now, he and a pal pulled a prank that made local headlines.

“In the winter of 1967,” Witt says, “my roommate, Rex Seifert, and I had the bright and literary idea of sticking a big scarlet letter A on the chest of the Alma Mater statue, which we did one snowy midnight, amid lots of laughing and looking out for cops. Then we called the Daily Illini — anonymously, of course — to let them know.

“We made the front page above the fold — or rather, Alma Mater did, sporting her big red A. No one ever found out who did it until now.

“Of course, this won’t mean as much to readers who never had to read ‘The Scarlet Letter’ in high school.”

— Economist Vipin Arora recalls passing one fine fall day as a freshman after class. “It intimidated and inspired me at the same time. And still does. I’ll never forget how majestic that statue looked: brown leaves littering the sidewalk, sounds from Altgeld Hall’s bell echoing in the air and the students rushing to make class with the chilly wind in our faces — all in front of that timeless monument.”

“If you look at most any picture of Alma Mater, you will see the gorgeous backdrop of very old trees. My favorite place on campus was a spot under those trees between the Student Union and the statue. I used to study at the Union as I loved — and oddly, could concentrate — being surrounded by the motion and din of happy, frenetic student activity.

“After studying, I would head toward Alma Mater. Halfway there, I would sit in this spot on the grass and gaze up at the trees. It was an incredibly peaceful place for me to pause and seemed to be located right between my present and my future possibilities. I always visit that spot whenever I return to campus and can even remember many of things I pondered there.”