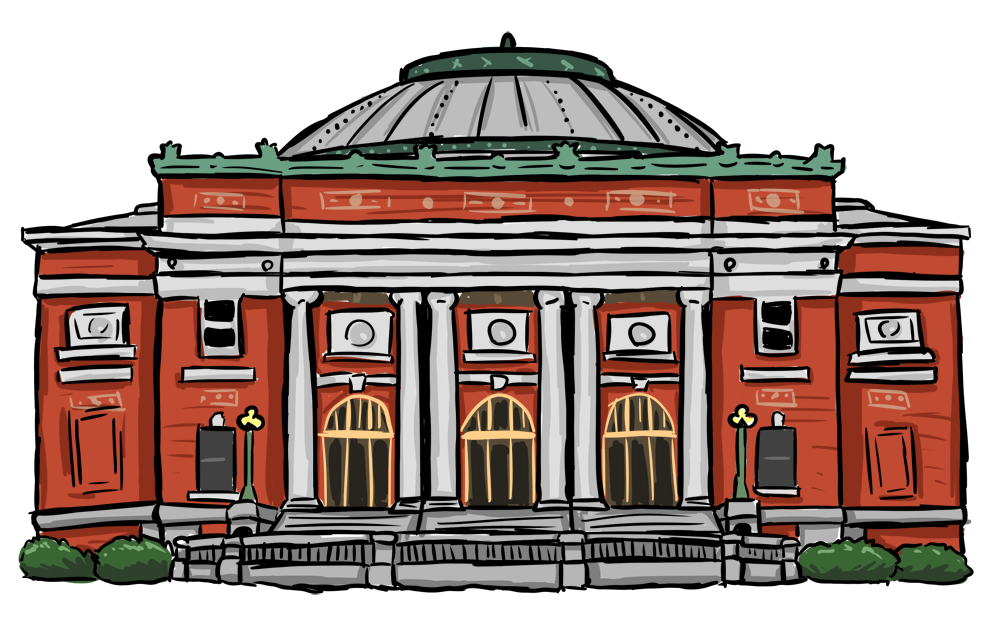 The first time he heard the funny word, he was inside what was then simply known as The Auditorium, seeing Pete Seeger perform. The year was 1948. “I made friends, some of whom I still have contact,” he says. “They are in their 90s, like me.”

Foellinger is also where ...

— Kristina Parsons would have the first of a number of cool jobs. Back in those days, the future assistant propmaster for Sony, Fox, Showtime and now Warner Brothers worked at Foellinger, “just making sure the building was open and lights were turned on for lectures, and closing up the building after they were finished.

“One of the perks of the job was getting to see some of the awesome events held at the auditorium, including concerts, a capella shows, step competitions, musicals and guest speakers, including Michael Moore. “And of course, being one of the few to climb up to the roof and see Foellinger’s famous dome up close.”

“Fall of 1993. It was my freshman year and first introduction into the glamorous world of accountancy. I found myself in Foellinger Auditorium, a majestic academic lecture hall seating hundreds for my first accounting course, Accountancy 101.

— It hit 18-year-old Victoria (Fan) Azalde: accounting isn’t dull at all. “I wasn’t entirely convinced I fit the mold of a stereotypical accountant,” says the now-assistant controller for the Bill and Melinda Gates Foundation. “I wanted to be creative, think outside of the box. “Then, one day, our accounting professor brought on stage two of her new pet ducks. She needed names for the ducks and solicited the help of the accounting students. We ended up naming the ducks Accy and Quacky. It was in this moment I realized that accountants are creative and fun.”

— The now-chief information officer for the city of Chicago experienced multiple college career highlights. Among them: taking Professor Richard Scanlan’s in-demand Greek and Roman Mythology class as a freshman: “Professor Scanlan brought the subject matter to life, often coming in costume, and always engaged us with the content he knew so well. He also led us in chanting I-L-L-I-N-I, instilling a sense of camaraderie and pride in our school.

“I also graduated in Foellinger, and remember taking those steps up after four years of hard work and growth to get my English literature degree awarded with highest distinction.”