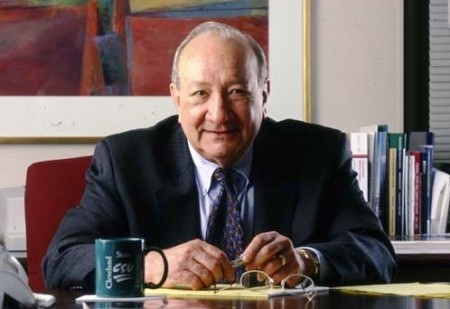 If the UI is ever in the market for a catchy new slogan, we highly recommend this line, spoken by an alum who'd go on to lead two universities:

That's the truth, says Michael Schwartz ('62), who served as president of Kent State and Cleveland State and still has warm and fuzzy feelings about Lincoln Hall — "long before it was renovated," he says. "I loved that place.

“I was a freshman and had my freshman rhetoric class with a grad assistant in the English department. His name was Allen Hayman. He gave me the gift of a lifetime. He taught me how to write decently.

"Later, in my junior year, I had a course in the sociology department with Professor James Edward Hulett Jr. He wrote on my term paper, ‘Nice use of semi-colon.’ I had arrived.

“I loved both of them and many other professors and grad teaching assistants. Through them, I studied ‘the shadow curriculum.’ I learned what they had to teach me. I also learned about them and how they lived the life of the mind.

“I became a professor and, later in my career, the president of two universities."