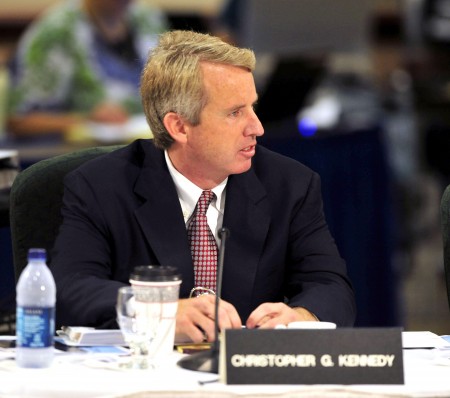 No one told Chris Kennedy there'd be days like this.

“My first board meeting at the University of Illinois occurred in Champaign-Urbana, and it drew a lot of attention, as an almost entirely new board was being empaneled," the former board of trustees chair still vividly remembers eight years later.

"We were taking a vote to embrace reforms as a result of the Category I scandal. The governor was going to attend, we were accepting resignations from high-ranking administrators, and we needed to approve an operating budget and confirm all academic appointments.

“I sat where I was told to, which thankfully was next to Michele Thompson, the longtime secretary of the board of trustees and the Rock of Gibraltar for the university.

“I turned to her and said, ‘I’ll start as soon as the press leaves.’ There was a riser set up with six to 10 TV cameras and a half-dozen or more print reporters. I had been on lots of not-for-profit boards and a few corporate boards, and I had never been at a meeting that was open to the public, and certainly not one that was open to the press, so I expected them to leave.

“And that was my introduction to the University of Illinois.”