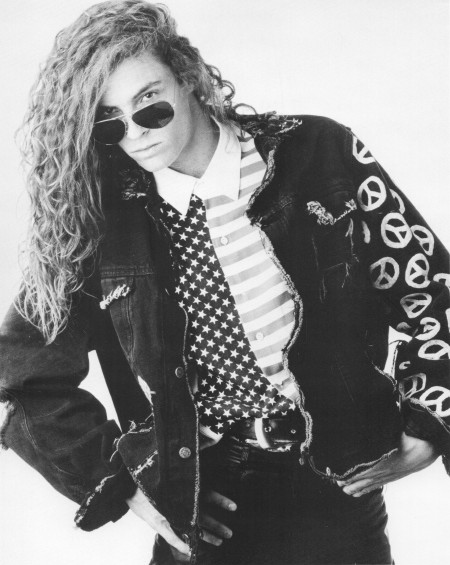 As you may notice from the accompanying picture, Darren Guccione didn’t much look like your typical engineering major when he arrived on campus in the fall of 1987.

“In addition to being an engineering student, I was the lead singer of a heavy metal rock band called Yuppie Hippie,” he says. “I was as much artist as I was engineer.”

Now, some professors might not devote much energy to a student like Guccione. Fortunately for him, the late, great Richard DeVor was not one of them.

The distinguished professor of manufacturing in the UI’s College of Engineering “liked that about me and took extra time of his day to meet with me one on one, even on weekends, to help guide me and make me better,” says Guccione (BS ’91, industrial engineering), now the Chicago-based CEO of mobile security software company Keeper Security, Inc.

“He also got me and my team access to a top-security science lab that was off-limits to students, so we could use the Cray supercomputer for our solid modeling and finite element analysis work. Traditional computers back then couldn’t handle the solid 3D models we had created, nor could they run stress testing using different energy vectors.

“Professor DeVor had an amazing impact on me and my team. He showed me that a week isn’t 40 hours — it’s actually 168 hours and that real success and technological achievements are located in the 128-hour frequency range. He was 100 percent right.

“To a student, Professor DeVor was equivalent to a Jedi Master. He pushed every student beyond their limits — he showed us that brilliance coupled with hard work was what yielded amazing results. He had a brilliant mind, worked extremely hard and was a sensational communicator.

“He could also analyze a person within five minutes of meeting them. He sat in every milestone presentation for every single team. He broke people down at times to build them up — he was a master of knowing how to weed out those who weren’t worthy of the challenge and the career.

“Moreover, he knew how to identify and shape those who were willing to be relentless in their pursuit of excellence. For those who didn’t care or weren’t willing to push themselves to the limit, he let them fail.

“His teachings and guidance not only helped us win the Morton Thiokol Excellence in Engineering Design Award; they profoundly changed the course of my life and how I would approach business as an entrepreneur, forever.”

Turns out, the professor had a pretty good eye for talent. In 2017, six years after DeVor's death, the UI’s College of Engineering honored Guccione with an Alumni Award for Distinguished Service, hailing “his expertise and leadership in the field of cyber-security and his entrepreneurial accomplishments.”