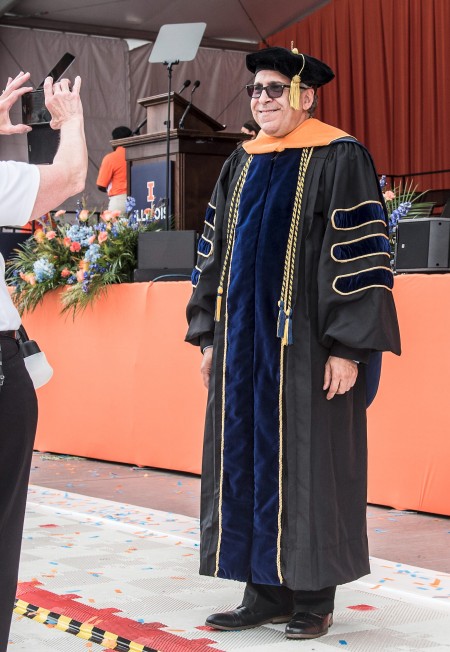 After 63 years, the alum who gave us the Chia Pet — and that catchy commercial jingle (Ch-Ch-Ch-Chia) — finally got to walk across the stage and receive his diploma.

Back in 1955, just weeks before Joe Pedott and his friends were to participate in their own commencement ceremony at the UI, he learned he was actually three hours short of a degree.

So it was off to summer school, not the commencement stage that year. And while he did graduate that summer, he never got to attend the ceremony.

“It was very disappointing when I found out that my advisor gave me the wrong schedule,” Pedott says. “I found out I needed three more hours. I was taking 12 hours at the time, and even taking a class without course credit. I was so disappointed.”

His journey through the UI was unique. Pedott started classes when the Chicago campus was based out of the Navy Pier, where students could go into a two-year undergraduate program. Pedott spent his freshman year there before transferring to the Urbana-Champaign campus.

During his junior year, he opened his own advertising agency — in part because of the advice an ad man working with NBC gave Pedott and friend Darrel Peters: All you need to start an agency is a business card.

“We took him seriously,” Pedott says.

And that’s how Pedott & Peters began, with the two writing and producing their own commercials. Struggling to pay his $64-a-semester tuition by working odd jobs when he started, Pedott and Peters were each making about $10,000 annually by the end of his junior year.

Five days out of the week, they’d attend class. Then, every Friday, they’d hit the road to Chicago, working for their clients through the weekend before heading back to Champaign at 5 a.m. every Monday.

Then Pedott got an unusual proposition from one of his professors, Charles Sandage, who would go on to found the UI’s advertising department.

“He knew what I was doing, and he asked if I could teach an Advertising 101 course,” Pedott says. “This was the same professor who once gave me a C on a test because he expected more out of me.”

After finishing college, Pedott dove straight into the advertising world, opening the San Francisco-based Joseph Enterprises Inc. in 1966. Eleven years later, he was back in Chicago at a housewares show when he learned about Chia Pets.

“I talked to the head buyer there in about February and asked what had sold best on Christmas,” he says. “And the guy that was running it was a Chicagoan. So I approached on behalf of the agency, and he told me he was losing $1 on every sale.”

A year later, Pedott bought Chia Pets at an offer that was twice the amount of a competitor. He changed everything except the name — the packaging, the seeds, the look and, of course, that famous catchphrase.

Now, Pedott has dedicated his life himself to giving back. He notes noted that when he attended the UI, tuition was $64 a semester. It was a scholarship and guidance that got him through college, but he said it’s much more difficult for a person as poor as he was to go to college today.

So he started Illinois Promise, a scholarship awarded to newly admitted students at the UI who have the most need for financial aid. It’s designed to cover tuition, fees, room and board, and books and supplies.

The funds come from a combination of grants, Pedott’s and others’ donations and some student loans. There are over 1,100 I-Promise students currently enrolled at the UI. He met with some of them when he returned in May 2018 to walk at the graduation ceremony he missed out on six decades earlier.

His advice for the Class of 2018? “Always believe in yourself. Take risks, there’s no bottom, just go for it. If you believe and work 25 hours a day, eight days a week, you can do anything.

“And never lie. Just tell the truth. Truth is a constant.”