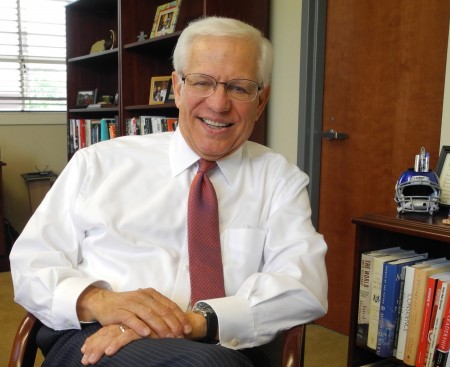 If not for the late, great Sam Gove, Bob Kustra may not be parking in the president’s spot at Idaho’s largest universities.

“When I look back on my studies at the UI, I think of only one person — Sam Gove, the former director of the Institute of Government who chaired my dissertation committee and was responsible for my finishing the Ph.D." in political science, says Kustra, who served in both the Illinois House and Senate before going on to serve as president at Eastern Kentucky (1998-2001) and Boise State (2003-18).

“Sam was there for me every step of the way as I struggled to juggle family and small children. Given the Ph.D. requirement for most university presidencies, it’s safe to say that I owe a substantial part of my professional life to a man who dedicated his entire life to the UI and believed in me.

“Sam passed away a few years ago and I did not have the opportunity to tell him what he meant to me and my career. Thanks so much for the opportunity to remember a man who never sought credit for the many things he did to strengthen the role of government across Illinois and mentor students who would come after him.”