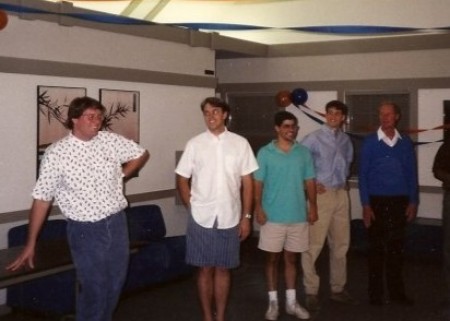 This Illini memory is dedicated to Illinois Swimming Hall of Famer Don Sammons, who rewrote the UI swimming record book in 22 years as head coach.

That’s him, to the far right, at Graeme McGufficke’s wedding rehearsal in 1990. When McGufficke was putting together his list of groomsmen, his old coach was an easy choice.

“When I think of the person in Champaign-Urbana who had the most profound impact on me, it just has to be Don Sammons. Don was the head coach of the U of I’s men’s swimming team from the 1970-71 season until the team’s demise as a casualty of Title IX after the 1992-93 season.

“Don brought me to central Illinois all the way from Darwin, Australia — Crocodile Dundee territory — where the temperature rarely goes below 65 degrees Fahrenheit. Over the years, Don was my coach, my boss, my mentor, my friend and even one of my groomsmen.

“Don loved swimming and being a swim coach. His passion for the sport was infectious. Don passed on that passion to all with whom he interacted.

“I will forever remember his ‘Good morning, Mary Sunshine’ greetings at our very early morning swim practices. And during one particularly grueling practice with many of the swimmers grumbling, his softly spoken ‘Quit your bitching. Take the pain’ became that season’s tagline and mantra.

“There are many more stories. Don was kind, generous and supportive. He continues to send me birthday cards, and I haven’t seen him for over 20 years. Without Don Sammons, my life would be completely different. I wouldn’t live in the U.S. I wouldn’t have met and married Karla Weidner, also a former Illini swimmer.

“So, to Don, I say thanks. Thanks for recruiting me to swim at the U of I. Thanks for hiring me as a graduate assistant. Thanks for standing up for me at my wedding. Thanks for being my friend.

“It has been, and continues to be, my honor.”