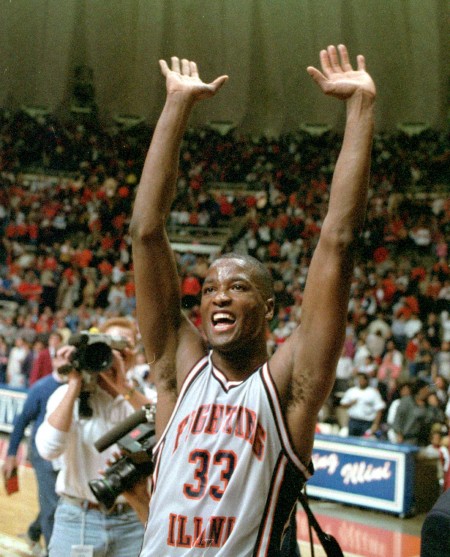 Anyone fortunate enough to have been on campus during the Flyin’ Illini’s thrill-a-minute 1988-89 season has a favorite Kenny Battle dunk.

“The one I remember more than any of Battle’s was at Ohio State,” former Illinois assistant Mark Coomes says. “He got an offensive rebound, and Grady Mateen at 6-foot-11 was between him and the basket. And Battle took one step and dunked the ball behind his head over the top of Grady Mateen for a three-point play. Now that was incredible.”

You want incredible? You should have seen Battle in March 1988 at Northwestern. Eleven seconds left. Lou Henson’s Illini up three. Play-it-safe time.

“It was a very close game, and he had a wide-open layup,” Henson says. “But instead of laying it in, he did a 360! We could have lost the game. He made the dunk, but we don’t like 360s at the end of close ballgames.”

That was No. 33 for you. Always the showman.

“You should have seen the stuff he’d do in practice,” Stephen Bardo adds. “You would have just run out of the gym, you wouldn’t have even believed it.”

Everyone has a favorite Battle jam. Including Battle.

“Probably the dunk against Florida,” he says. “It was an out-of-bounds play right in front of our bench. Larry Smith threw a lob from out of bounds, and I caught it on top of one of the Florida guys.”

“Oh man, I’ve seen him dunk over many 7-footers,” former teammate Lowell Hamilton says. “And he looked good doing it. Nick Anderson was power. Kenny Battle was power and finesse at the same time.”

“That one would do Michael Jordan proud,” the UI’s longtime official timer says.

Rod Cardinal, the UI’s trainer in those days, would cast his vote for Battle’s blind double-pump reverse layup in the Syracuse game. Beats any of the dunks as far as he’s concerned.

Battle didn’t have the NBA career that fellow Flyin’ Illini alums Anderson and Kendall Gill did — four teams, 134 games, 4.7 points per — but he left a lasting legacy.

Each year, the Kenny Battle Inspirational Award goes to the guy who shows the most spunk, tracks down the most loose balls, wins the most suicide sprints after practice.

“Is there such a word as ‘emotionalize?’” Bardo asks. “Kenny gave emotion to what our team was all about. Very fiery. Nick Anderson was very competitive, but he was very, very quiet. Kendall was very stoic. I’m kind of outwardly (energetic) but not as much as Kenny Battle.

“He was the spirit of that team.”