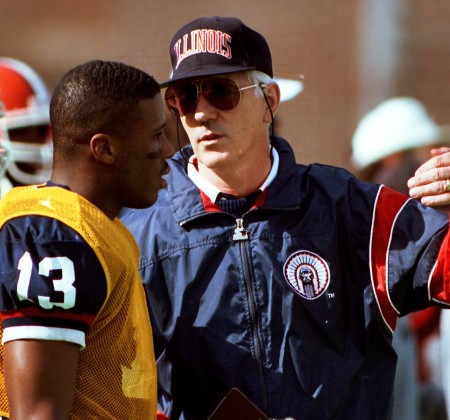 Greg Landry’s fondest — er, most unforgettable — memory of his two seasons on Lou Tepper’s Illini football staff came after he was shown the door in February 1995.

The back story, from 15-year NFL quarterback and longtime coach, who produced the Big Ten’s second-best passing offense in his second season in C-U:

“When I came to Illinois as the offensive coordinator, I felt the program was in disarray," Landry says 25 years later. "I had an offense to rebuild and I was the father of five children. I really didn’t have time for socializing.

“My best memory of my time there actually came a few nights after I was let go. We were coming off the Liberty Bowl with a 30-0 win (over East Carolina) in my second year. I felt we were ready to challenge for a Rose Bowl bid the next year.

“Near the end of the Liberty Bowl game, we were so far ahead I began putting in my backup players. How excited those players were to be playing in a bowl game, something they would always remember.

“When I realized the same was not happening on the defensive side of the ball, I grabbed as many backup defensive players as I could, asked them what position on offense they played in high school and put them in on offense.

“A few nights after I was let go, one of the players asked me to meet some of the team members to say goodbye. When I got to the hall, all but two players were there and the other two, who had class, called me the next day.

"It will always be my best UI memory.”