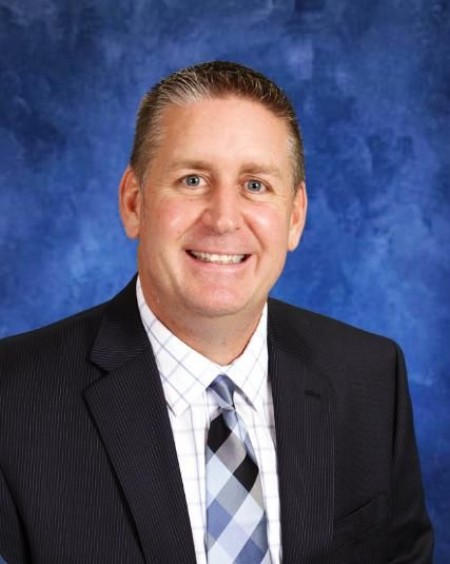 The idea struck Lance Landeck in the fall of 1986, shortly after the former Villa Grove quarterback and forever Illini fan arrived on campus for his freshman year.

“I called the football office and asked, ‘How does one become a football manager?’”

He was in luck.

“It just so happened that all of the current managers were graduating that year so they needed all new managers,” Landeck remembers being told. “A group of us were invited to ‘try out’ during spring practice in 1987.

“The next three years were spent in what I continue to call to this day ‘the best college job in the world,’” says the 1990 economics grad, whose local career in education has taken him from Tuscola (teacher) to Atwood-Hammond (principal) to Oakland (superintendent since 2011).

But back to the football.

“I got to spend Saturdays in the fall on the sidelines of Memorial Stadium and other college campuses, not only in the Big Ten, but across the country. On a day-to-day basis, I got to witness close up Mike White, John Mackovic, Jeff George, Mike Bellamy, Howard Griffith, Chris Green and many others practice their craft.

“During those three years, I developed friendships that continue to this day with the other managers, players, support staff and coaches.

“Andy Dixon, the equipment manager at the time, taught us about work ethic, friendship and how to treat others, all qualities that I still practice to this day.

“I may not have had the physical attributes to play college football, but my experiences as a part of the Illinois football team had a huge impact on who I am today.”