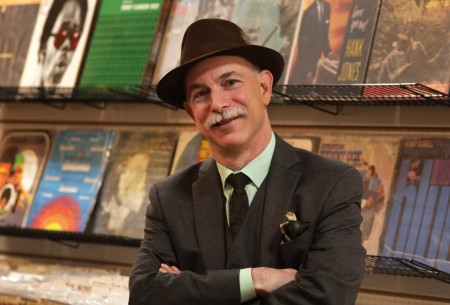 Mark Stryker will be back on campus this week for a book talk and signing, set for 6 p.m. Friday in the second floor of the Illini Union Bookstore (809 S. Wright St., C). The Michigan Journalism Hall of Famer’s ‘Jazz From Detroit’ was honored as Jazz Book of Year in the 2019 Jazz Times Critics Poll.

A glass of Old Style went for 60 cents. Cookies — “as big and thick as hockey pucks,” as Mark Stryker remembers them — cost half a buck. And if you timed it right, you might be treated to a performance from a 14-year-old future singing sensation named Alison Krauss.

This was the late, great Nature’s Table, circa the mid-1980s.

“I went to school at the University of Illinois, but I got my education at Nature’s Table,” says Stryker (’85), an American History major and jazz junkie who played alto saxophone in UI bands led by John Garvey and Ray Sasaki.

“Located at 509 South Goodwin, directly across from the Krannert Center, Nature’s Table was a sandwich shop that morphed into a cozy jazz club at night. It lasted from 1979 until 1991, when the university, in expansionist mode, regrettably tore down the building."

Stryker, who’d go on to spend two decades covering and critiquing arts and music for the Detroit Free Press, played with various groups around the area and led his own bands at the spot that became his home away from home.

“I spent so much time at the club, I could have had my mail delivered there,” he jokes.

“Nature’s Table was owned by two beautiful souls, Terry Masar and his wife, Shelley Washburne Masar. Terry and Shelley forged a community of musicians, artists, campus progressives, and misfits of all types. The Table was a place where everyone was welcome and could express themselves. It had an artsy vibe. Sometimes, dancers would spontaneously break out into abstract, modern moves in front of the counter.

”I started playing there in the spring of my freshman year. I also worked behind the counter for a couple of years after I graduated.

”I learned so much about music and life there. I heard tremendous musicians: Leading Chicago players like saxophonist Ron Dewar, pianist John Campbell and legendary saxophonist Von Freeman; top national stars like saxophonist Dave Liebman and organist Jack McDuff; superb musicians on the local scene, including veterans like the soul-jazz group Sorgum, trumpeter-composer John Scott, and a gaggle of my peers who became professional musicians — pianists Mike Kocour and Laurence Hobgood, trumpeter Jeff Helgesen, bass trumpeter Ryan Shultz and many others.

“I also heard a 14-year-old Alison Krauss, a Champaign native who grew into a country superstar. What a voice she had.

“Every night was a clinic for me. Once, after a set, I asked trumpeter Ray Sasaki how he managed to sound so relaxed and intense at the same time. He said, ‘The more you relax, the harder you can work.‘ I never forgot that lesson — the applications go way beyond music.

“There was an African American alto saxophonist who lived in town and played often at Nature’s Table. His name was Guido Sinclair — Sinclair Greenwell Jr. (1935-1992) — but everyone called him ‘Ghee-Doh.’ Originally from Texas, he had been living in Chicago, before he came down to Champaign to kick a drug habit around 1980 and never left.

“He became a mentor to me. Guido was a bebop musician with an authentic sound and phrasing influenced by Charlie Parker. Guido looked the part. He had a craggy face, a hipster’s gait and he kept his fingers super close to the keys when he played, with a lit cigarette still in his hand.

“He was a complicated man. Half of him represented the truth, half was total bull. He could be as generous as a best friend or as manipulative as a con man. It took me a while to learn how all of these contradictions could be bound up in one person.

”When I was a freshman, I would go over to Guido’s apartment. I’d get there around noon, and he’d barely be awake. The first thing we would do is walk to the corner liquor store, and I’d buy him a big bottle of malt liquor. We’d go back to his crib, and he’d drink the malt liquor and start to come to life.

“I haven’t even opened my saxophone case, and I’ve already gotten a lesson about life. Then we’d get out our horns and we’d play through Charlie Parker solos together. I would try to copy Guido’s phrasing and articulation.

“Nature’s Table changed my life. I didn’t become a professional musician, but my career as an arts reporter, critic and author has been shaped in ways large and small by the countless nights I spent in the club and the friends, musicians and teachers with whom I grew close within the orbit of that special crucible."