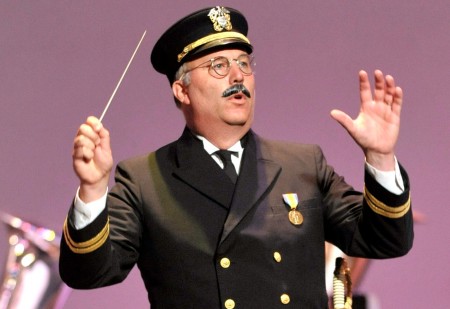 What does Peter Griffin remember most about his debut as director of the Marching Illini?

Well, for one, everything.

"My first major performance with the Marching Illini involved the same concerns and thoughts for every other performance we shared," says Griffin, now the music department chair at Elmhurst College. "The performance itself was the least of my worries as we had an incredible group of musicians and staff who were dedicated and passionate about their work and their performances. It was everything that led up to the start of pregame on game days that was so crazy.

“First of all, getting 350 people out of bed early on a Saturday morning to trek to the stadium for rehearsal was completely out of my hands. They were on their own, and if they did not show up for rehearsal, they did not march that game.

"Inevitably, someone would ask where the bathrooms were. For the first performance of the season, we were hopeful all members knew how to wear the uniform with all of its parts, and we made corrections as necessary.

"Was the sound system charged long enough to last the day?  Was everybody healthy? Was the food for the band ready? Were the ladders we used at the 50-yard lines going to be in place when we had to start? There was one time when they were not.

"Did everyone have their music? Was water ready for them after pregame and halftime? What was the weather forecast for the day and did we need rain parkas?

“As the clock ticked down to our starting time additional thoughts would enter my mind.

"Did I sound OK on Jim Turpin’s show on Friday? Did I get the timing sheet correct? Is Andy Isbell ready to announce the band? Would all members be in place when it was time to start pregame?

“And then, we were given the signal to start. I climbed the ladder, raised my arms, blew the whistle to start the pregame show and the band created magic.

"This is how it was for that first major performance and every one of those that followed.”