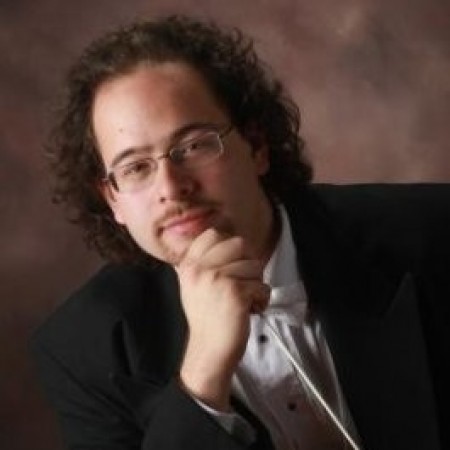 Rare is the day goes by that Aaron Kaplan doesn’t ask himself the question that’s guided his career as a musician.

That question — What Would Donald Schleicher do?  – is inspired by the educator who influenced the young conductor/cellist/arranger more than any other.

“Watching him rehearse every week for six years was a gift that I will always treasure,”  the dual-degree School of Music grad says from Chicagoland, where he’s the orchestra director at Glenbrook North and South high schools.

“Throughout my time in the School of Music, I was fortunate to be able to work and collaborate with dozens of the amazing, world-class faculty. I think often about what I learned from the Pacifica Quartet in chamber music coachings and cello lessons, but the one professor that had the most profound impact is Donald Schleicher — conductor of the UI Symphony Orchestra and chair of the orchestra division.

“I was lucky enough to play in the UISO as an undergrad and in the lab orchestra for the graduate conductor students, and then did my master’s in orchestral conducting with him and was his TA for two years.

“Professor Schleicher is one of the most effective and respected conducting pedagogues in the world; people from all over the world come to his conducting workshops to learn from him. He is a treasure of UIUC.

“And as his conducting student, he teaches you everything. From score study and musical interpretation, to dealing with board members and programming educational concerts — he prepares us for every possible scenario. He taught me how to love Mozart and Brahms, what pieces to do on a Halloween concert, and the relationship between Seinfeld and The Barber of Seville. He is incredibly humble, has a dry sense of humor, and has two adorable young kids.”

Whenever Kaplan reflects on his six years on campus, it’s also a good bet it will include something that happened at Krannert Center for the Performing Arts.

In particular, the center's lobby, where he spent countless hours from 2007-13.

“At any given moment, there are directors meeting at Intermezzo Cafe, conductors studying and conducting to themselves at the Stage 5 tables, and world-class artists and university students rehearsing side-by-side in the Foellinger Great Hall, Tryon Festival Theatre, Colwell Playhouse, Studio Theatre or the outdoor amphitheatre. Level 21 has dozens of rehearsals going on at once, as well as entire sets and costumes being constructed.

“In the lobby, you are in the middle of the Krannert universe and you can feel the creation and passion filling every space. It is a cultural hub in the Midwest and the world’s foremost artists come here to perform for the community and the students.

“I would often come to the lobby and study scores because during the day it was a quieter space to reflect, but at night it becomes alive with people seeing different shows. The electricity is always there."