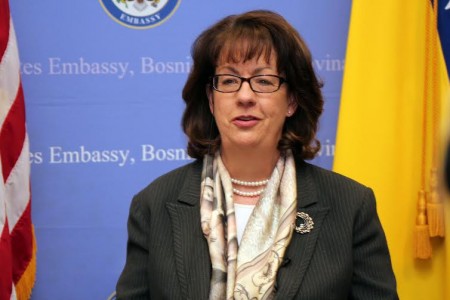 Maureen Cormack’s road to the U.S. embassy in Bosnia and Herzegovina began at 500 South Goodwin Ave. in Urbana.

“My first week on campus, having just arrived from far-away New Jersey, I was lost. When a neighbor insisted on dragging me along to an interview for ushers at the Krannert Center, I grudgingly agreed, having no idea what it even was. From that day forward, it took over my life," she says.

“I changed my major, writing my own Independent study program in performing arts management. I became the dance stage manager my senior year, and that stipend is the only reason I graduated, as my father passed away that December and our family resources, already limited, were cut to the quick.

“It was there that I learned the power of the arts to bridge divides, both at home and around the world. A master’s degree from the University of Chicago led me to the foreign service as a public diplomacy officer.

"But the wonderful experiences I gained at U of I, including four years of great opportunities at the Krannert Center, are what laid the foundation for all that has followed.”