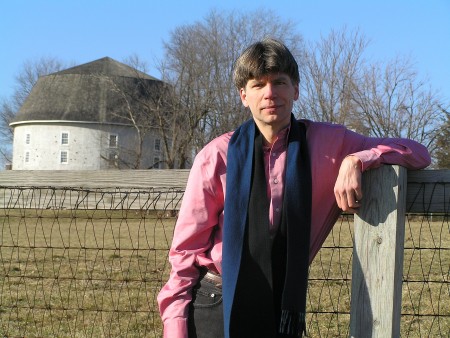 The 1993 novel he finished while a writer-as-residence at the UI, ‘Operation Wandering Soul,’ was named a National Book Award finalist but didn’t win Richard Powers the big prize.

Two years later, ‘Galatea 2.2’ — for which he leaned on his experience as an adjunct faculty member at the Beckman Institute — was well-received but not the hailed as the best novel of 1995.

So, when the UI physics major turned two-degree literature grad found out that his 2006 novel, ‘The Echo Maker,’ had made the final cut for the National Book Award, Powers didn’t get his hopes up.

“I had been a nominee before and the one-in-five odds aren’t great,” he says. “But I went ahead and rented a tux and headed to New York and a fancy hotel in Times Square for the ceremony, perfectly resigned to a life of being always a bridesmaid.

“The finalists were all given medals that they were supposed to wear to the ceremony, in the event they were called to the stage. I had walked the several blocks from my own hotel to the one where the ceremony was to take place before I realized I had left my medal back at my hotel. So I ran back to my hotel, grabbed the medal and dashed back through the streets of Midtown in my tux, like a criminal on the run from the police.

“I got to the ceremony just as they were starting. When they called my name, I couldn’t take it in, but I was glad to be properly kitted out.”

Thirteen years later, Powers added to his lengthy list of accolades, when his 2018 novel 'The Overstory' was awarded the Pulitzer Prize for Fiction.

Among his greatest literary influences at Illinois: French professor Stanley Gray, who "once told me when I was a young man that my own pleasure in something I wrote had to count for at least as much as any other person's disapproval. That small bit of advice has helped to keep me going over the course of 12 novels and a third of a century."