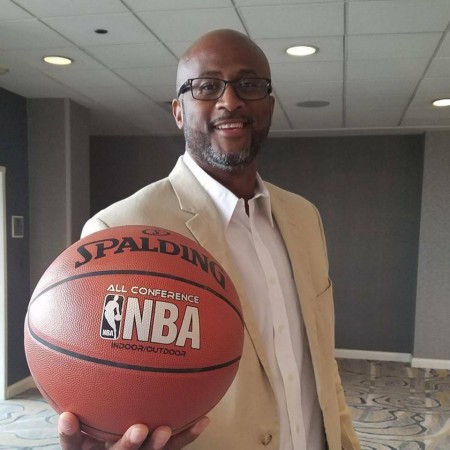 “Good Morning America” made a TV star out of him.

USA Today followed his every move.

And then Marcus Liberty went to college.

“I know how it is when people praise you and put you on a pedestal,” said Liberty’s old Flyin’ Illini teammate, Lowell Hamilton, who went through a little of that himself. “Especially your boys. You’ve got your boys telling you, “Man, you’re the No. 1 player in the country. Man, let’s go kick it. Man, let’s go hang out.’

“They’re putting all this pressure on you. And you have to remember, this is a kid. In high school. Now what is he thinking about? ‘Wow man, I gotta make the NBA. I gotta do this, I gotta do that.’”

Everyone’s national high school player of the year never became the Sports Illustrated cover-gracing, triple-double-averaging, NBA All-Star who got a sneaker named after him, like a lot of folks thought he would.

Liberty had a decent college career, turned pro early, got drafted late, put in four years in the NBA, then bounced around from France to Greece to Turkey to Sweden to Puerto Rico to the Philippines to Japan.

Now 49, he got into coaching in 2000 at Las Vegas’ Cheyenne High School and took a liking to it. These days, he lives in Sarasota, Fla., where he’s the head coach at the Out-Of-Door-Academy and has been a mentor to many.

But back to college basketball, which didn’t start for Liberty the way many predicted it would.

He went from being bigger than the Bulls as a senior at Chicago King to getting no acclaim as a freshman at Illinois.

Any attention Liberty received that first year had to do with his ACT score, which kept him on the sidelines in 1987-88.

Back then, there were different rules for freshmen who couldn’t pull a 13.5 on the ACT.

“One game, I sat behind the bench, and the next game, they told me I couldn’t even do that,” Liberty said. “So they had to give me tickets like way up in the boon, man. All the way up at the top. I got real mad about that. I didn’t even feel like I was part of the team. It was like I was on my own.”

He stayed in shape that off year by playing pickup ball with some of John Mackovic’s football players and Gary Wieneke’s sprinters at IMPE.

But it wasn’t the same. No middle linebacker could stop Parade Magazine’s prep player of the year.

Shoot, Nick Anderson had problems doing that. Liberty’s future teammates all had run into him in the Chicago Public and couldn’t wait to have him on their side.

“Marcus was probably the only player I’ve ever seen at that height that could do the things he could do,” Kendall Gill added.

When Lou Henson’s most highly rated recruit finally arrived in the fall of 1988, there was no room for him in the starting lineup. It was all set from the year before, with Gill and Stephen Bardo at guards, Anderson and Kenny Battle at forwards and Hamilton in the middle.

“Marcus was a very good player, but he couldn’t beat out those five,” Henson said.

So he came off the bench. And don’t think he didn’t hear about it when he went back to Chicago.

“When you go home, guys are like, ‘Man, you ain’t even starting,’” Liberty said. “Deep down in my heart, I wanted to be a starter on that team, but I’m playing behind Nick Anderson. That guy was awesome down there. I knew I wasn’t going to take his place. And Kenny Battle was a senior. You know how that is.”

Liberty had his moments during the 1998-99 Final Four season. He came to the rescue in Minneapolis when Battle and Hamilton went down, with 14 points and eight rebounds in the Louisville thriller. He stepped in as a starter when Gill broke his foot against Georgia Tech. He had 21 against Purdue, 20 against Northwestern.

He wishes he could have done more.

“If you do a study of the McDonald’s All-Americans, you’ll see it’s not a very good success list,” former Purdue coach Gene Keady said. “The kid can’t help it. It’s kind of unfair to them because sometimes there’s so much pressure on them. They develop early and they don’t continue to grow in their work ethic, and sometimes they’re not as successful.

“Not saying he was that way. But sometimes a kid gets a label on him, and for him to live up to that, it’s tough.”

Fans got to see only flashes of the Marcus teammates knew and loved.

To see that guy, you had to go to Huff. Or IMPE. Or some playground in Chicago.

“In Marcus’ defense, he really wasn’t allowed to play his natural position,” Bardo said. “Marcus is much more effective when he’s a two or a three, and he really wasn’t able to play that because we were such an undersized team. It kind of took away from his game.”

At 6-foot-8, Liberty never got the hang of banging inside, costing him a few NBA bucks and driving a few of his coaches crazy.

“Everybody just thought it was a shame that he didn’t realize his basketball potential, and I think it was because he wasn’t mean enough,” said Scott Nagy, the Flyin’ Illini’s grad assistant.

But that was Liberty’s personality. As nice a guy as you’ll ever meet, former teammate Larry Smith said.

Easygoing. Sensitive. Not a meanie.

“He wasn’t what I’d call a baby, but he wasn’t a tough guy,” former assistant Dick Nagy said.

“Marcus Liberty was a very talented player but kind of a soft player,” said Jud Heathcote, the late Michigan State coach. “He needed more college experience to toughen up. He had a very average and short pro career, and I think had he stayed an extra year that might have made a difference.”

So does Liberty, who regrets skipping school after two seasons.

He said he did it for the money and for fear the NCAA would come down hard on Illinois in the Deon Thomas matter.

When he left, Liberty was being sued by a former landlord for $4,400-plus after his dog tore up his campus apartment while left alone one weekend.

Had he stuck around for his senior year, Battle says, “Illinois fans would have seen the real Marcus Liberty.”

Gill would have been gone, leaving a lot of the load on Liberty’s lap. He was starting to come on as a junior, scoring 33 points against Minnesota, averaging 17.8 and earning third- team All-Big Ten honors.

“He was just starting to mature as a man,” assistant coach Jimmy Collins said. “One more year would have made it easier for him to make the transition from college to the NBA. When you’re going to the NBA, if you’re not mature physically and mentally, you’re running into guys that are 30, 35, 40 who are depending on that spot to support their families, to support themselves, to get out of debt.

“Coming out of college, you’ve never experienced that. You don’t know how to get down and dirty to accomplish what you need to accomplish. You’re awed by some guys. And I’m talking strictly from experience here. You’ve been reading about them for years. You have a tendency to watch to see if they’re doing something that you should be doing or should not be doing.

“If you’re not fully mature, you get hung up in that and you kind of fall back a couple of steps. I think that’s what happened to Marcus when he went to Denver.”

Liberty, whom the Nuggets made the 42nd selection in the 1990 draft, thinks things would have been different if he’d had a veteran around to show him the ropes.

“A Scottie Pippen, a Charles Barkley, someone like that,” he said. “Someone who could take me by my hand and say, “Look young fella, this is what you’ve got to do.’”

Liberty put up 6.7 points a night as a rookie, 9.3 in 1992 and 8.1 during a tumultuous third season under new coach Dan Issel. The next year, the Nuggets shipped him to Detroit, and he hardly was heard from again in the NBA.

Liberty, who never cared much for the view from the bench, saw a lot of it in his first, and last, year as a Piston. He was cut loose after playing in less than half of Detroit’s games and scoring 100 points the whole season.