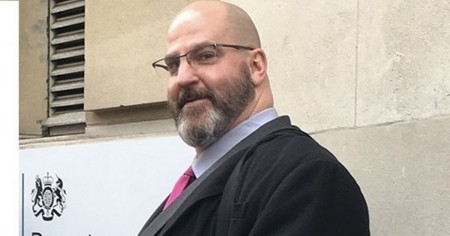 Principal | Solihull Academy of the UK | Class of 1995

Here’s a story you won’t find anywhere in the official bio of Stephen Steinhaus, the Illini football walk-on turned Fulbright-winning principal of a UK school for at-risk kids:

The spot: “the doorway at Joe’s Brewery, where I met one of my very best friends — the godfather to my eldest son and master of ceremonies at my wedding, Scott ‘Pillow’ Andresen, on the Sunday before Martin Luther King Day, 1993,” recalls Steinhaus (BA ’95, teaching of English).

“It was my first night on the job working as a bouncer at Joe’s. I was a walk-on for the Illini so I worked the doors and life-guarded in the offseason to help pay the bills.

“Pillow was training me and had just said that I would be a rookie until I got someone else’s blood on  my jersey.

“As he said that and came around the corner, I saw the owner of Joe’s get jumped in front of the main bar — he had insulted someone — by about 10-15 guys on a bar crawl. Pillow just looked at me and said, ‘Have at it, Rookie’ as he leaned  against the door frame and took a sip of beer.

“I waded in, grabbed the owner by the hair, pulled him out of the pile-up and proceeded to do battle with all of the bar crawl dudes on my own — with no help from anyone except a slightly crazy chef from the bar who had just finished his shift.

“I was ramming guys into the pay phone and chucking them off the front door. Eventually, I managed to throw out every single one of them, conscious or unconscious.

“I wasn’t a rookie after that — and Pillow didn’t lift a finger the whole time.”