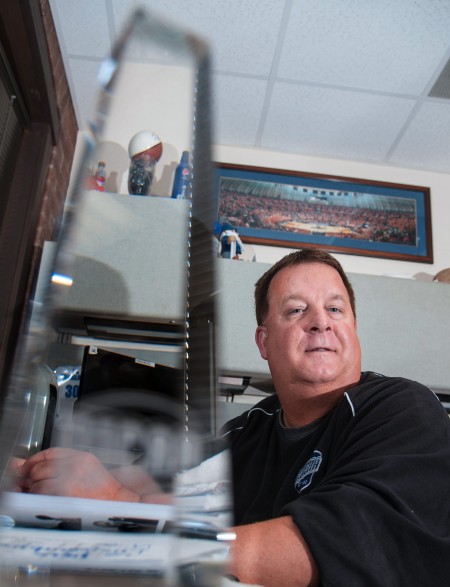 Before he ran a team or department of his own, Rod Lovett got to watch how a few of the best in the business did it — without even having to leave his hometown.

As apprenticeships go, the ones the future Parkland College athletic director experienced as an Illinois undegrad, then grad student, were as impactful as any experience in Lovett’s storied sports career.

“One of the people who made a big impact was the late Tony Clements from Campus Rec,” says Lovett, now the director of championships for the National Junior College Athletic Association. “Tony was one of the most positive and motivating people I met and my experiences working as an undergrad for them at IMPE were invaluable.

“I met many amazing people and learned a lot being the chair of the Protest Board,  officiating games and developing schedules. I also met my future grad school advisor, Dave Matthews, through there and spent time working at IMPE, Freer, Kenney Gym and Huff.

“I owe much of my future career success to the experiences I had in graduate school working with the men’s track and field and cross-country programs.

“Gary Wieneke was an outstanding mentor, as were the coaches on his staff, Willie Williams and Jerry Clayton. I was part of the program (in 1987-88) when the Illini were extremely successful at the NCAA and Big Ten level with some amazing world-class athletes.

“Coordinating recruiting, working meets and supporting the staff and athletes prepared me for my future at Parkland and now with the NJCAA.”