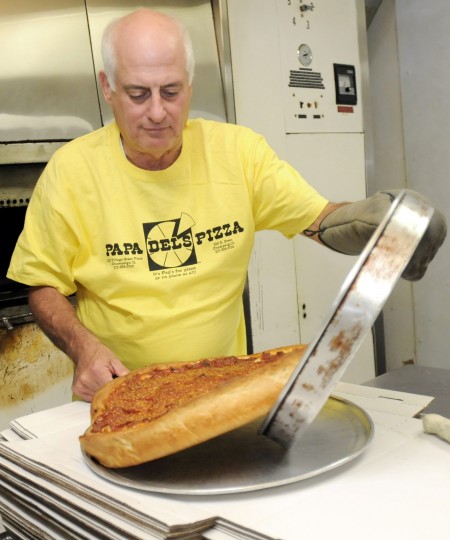 Don’t recognize that last one? Perhaps you know Bob Monti by his alias — “Pops,” owner of one of the most-mentioned places in our alumni poll.

“Pops, or so he is now called, named Papa Del´s Pizza back in 1970,” says his daughter and general manager, Andrea Seten, a proud UI alumna herself. “He was a student at the University of Illinois and in the Phi Sigma Epsilon fraternity. His last name is Monti and his fraternity brothers called him Del Monti, like Del Monte the fruit and vegetable company, or ‘Del´ for short.

“He kept having to take semesters off to work to pay for school, so he was soon the oldest in the fraternity. He was also the president for two years. The young guys called him ‘Pops.´ Hence, the name Papa Del´s.

“He was thinking of calling the restaurant Del Monti´s but thought he would be in trouble with the vegetable people for copyright infringement.

“The fraternity brothers were also the guinea pigs to his recipe testing. He eventually dropped out of the university just a few credit hours short of graduating to open on Wright Street in October of 1970.”