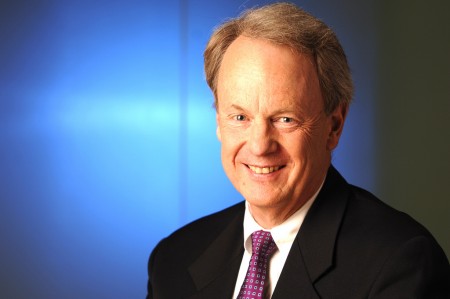 John Zeglis will always know her as “iconic” Alma.

“The ‘happy children’ engraving says it all — still,” the Bronze Tablet-winning former president of AT&T says of his favorite campus landmark.

Not only is he a fan of the powerful message but “Altgeld Hall, immediately behind the statue, is where my father went to law school and kicked off the success-through-education theme that the family still abides by, almost religiously.

"And I got engaged to Carol Hamm of Alpha Chi Omega on that very spot, knowing that at some point in our 48 years of marriage — so far — someone would ask the question you are asking.”

Zeglis lived at 202 East Daniel, home to Beta Theta Pi — “and what a physical specimen it was back then, with its giant Greek-style pillars, just what I thought a college home away from home should look like in the middle of a majestic campus," he says. "Besides supplying refuge and an identity, the house lives in my memories as a place where mostly good things happened: new best friends in my pledge class; mixing hard studying with a few hijinks — mild because we had a house mother back then.

“I gotta admit that the subsequent decline of the fraternity makes the memory lane thing a little bittersweet, but I’m hopeful that the ‘re-colonized’ Beta will restore the house and its impressive pillars to their former glory.”