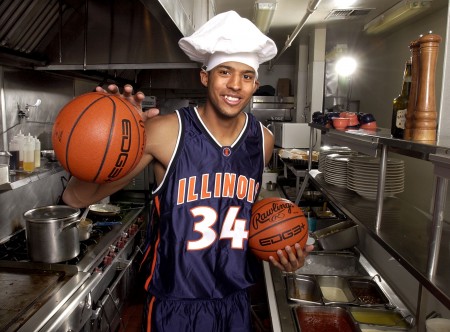 Among the stories making front-page sports headlines in 2003:

Lakers draft Cook with 24th pick in first round.

And then there was the headline that came too close for Brian Cook’s comfort to making it to press one winter day 16 years ago:

“My story comes to you from the a memory I had when we played Michigan at home in 2003.

“Walkthrough went great that morning as everyone had stern looks on their faces getting prepared for battle against one of our arch-rivals. After walkthrough, players have a chance to go home and rest — my routine was to take a nap, read, calm down, eat and then head to the gym.”

Chalk up what happened next to being hyper-focused on the task at hand — beating a middle-of-the-pack Michigan team for the fifth straight time under Bill Self.

“Being the top player in the conference that year and having been focused on the game and preparation, a brother ran out of gas, y’all. On the way to the gym. Luckily, I had a little gas in the gas can I had in the depths of my trunk.

“So while pouring the gas into the gas tank, my hands got soaked with gas. It instantly froze in the cold winter of Champaign-Urbana. Just another day in the life of a college student in the wintertime at the University of Illinois.

“I go to start my car, turn the key in the ignition and the car doesn’t start. My emotions get the best of me and I punch the steering wheel before realizing I’m going to have to push the car to the Assembly Hall parking lot, which was about a country block away.

“Here you have the Big Ten Player of the Year outside, pushing an old bucket that got me from point A to B in college down the street in the middle of the winter. No beanie. No gloves. Just my University of Illinois coat and official team sweat pants.

“It’s a blizzard outside. My hands are frozen from the gas. I finally see the dome of the Assembly Hall and the lights and let out a sigh of relief.

“Luckily, I left early enough to get there so I had some time to do some things as my hands were frozen solid. I walk into the training room and I see our team dad, friend and hell of a trainer, Rod Cardinal, who’d saved us all from injuries for years and is the reason why we had good teams back then.

“I hold my frozen hands up to him. They are red and for being a colored man, that’s not the color that they’re supposed to be. Rod looks at me and smiles. He had a way of doing that with all the players who came through the program — a trainer is both a psychologist and a person who works in kinesiology. For all the players that he trained, Rod gave therapy, too.

“He said, ‘Put them in the training hot tub.’ I thought, ‘(Shoot).’ I’m freezing cold but I took everything but my practice shorts off right there and jumped into the hot tub.

“That night, I still had the concentration to have a big game in a big win. And after the game, I passed out from exhaustion.”