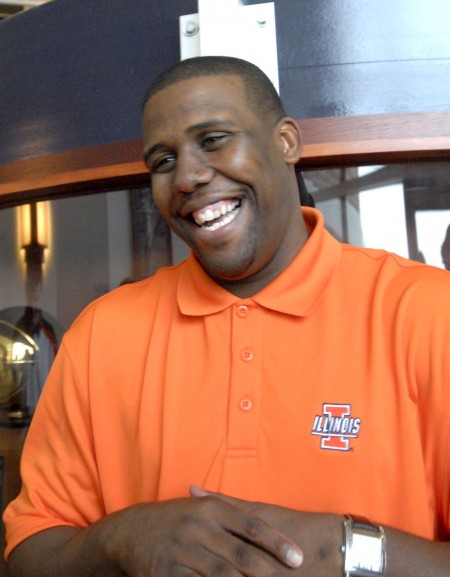 On days when the weather was nice, the Quad was assistant coach Jerrance Howard’s deal-sealing pit stop anytime a blue-chip high school basketball star was in town for a look around.

“After the visit was about to be over, I would grab the recruit away from their parents and take them on the golf cart to the Quad for a heart-to-heart. To me, the Quad was the heart and soul of campus. It was the heartbeat.

“I’d time it up right when classes were letting out so the recruit can see all the students and feel the energy.

“Nothing but good vibes and making the recruit feel like he belongs and wanted to come back,” says Howard, who played on Illini teams that went 104-31 with three Big Ten titles.

After three years as an UI assistant under Bruce Weber and one year at SMU, Howard joined Bill Self’s staff at Kansas in 2013.

Paul Klee from 2008: At home with Howard
Brett Dawson from 2004: Captain of the ship