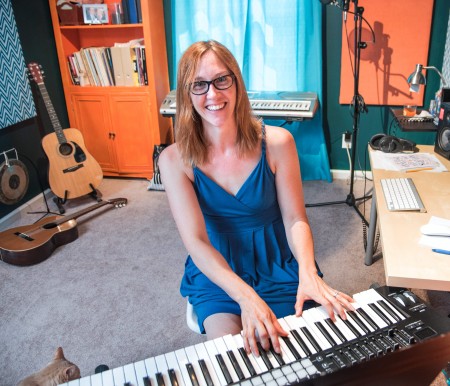 Back in her home state for all of one day, newly enrolled UI grad student Cara Maurizi had already had it up to here with the crummy weather.

“I moved here from Norway in January 1999 in a blizzard,” she says. "I was tempted to go back  — because the weather was better there.”

Of course, things got markedly better the in the weeks, months and years that would follow for Maurizi, who’d go on to earn her master’s in music education, then embark on a career as a teacher, composer, improviser, singer and actor who'd put on and perform in acclaimed productions.

It was a fellow UI alum she’d met while in grad school who helped make one of Maurizi’s most memorable on-stage moments happen.

“The person who made the strongest impact on me was someone who reached out to me after I finished grad school and was already teaching” in Urbana schools, she says. “I had been teaching music in public school for three years.

“In grad school, I sat next to a lovely woman in grad chorale. Her husband was directing a summer musical and she reached out to me. She asked me to audition for his show because she remembered my voice. His name was James Zager and he is still a theatre professor, now in Wisconsin.

“I ended up getting cast as the female lead in a two-person musical called ‘The Last Five Years’ at Krannert Center for their summer series. It was one of the best theatre experiences of my life and the first time I was ever paid to be an actor.

“I still look back on that as one of my prized memories at U of I.”