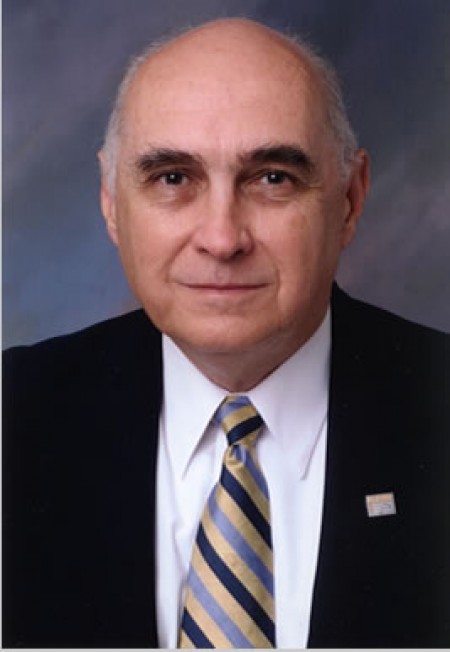 Dan Halpin (MS ’69, Ph.D ’73) enjoyed his Illini experience so much, he devoted a chapter of his memoir to it.

Honored with a 2008 distinguished alumnus award from the UI’s Department of Civil and Environmental Engineering in 2008, the Purdue professor emeritus is known throughout higher ed as the author of the textbook “Construction Management,” required reading for students at many engineering universities.

At Illinois, this ought to be, too. Halpin shared with us the introduction to “The Illinois Years,” a chapter in his memoir:

“Little did (wife) Maria and I know when I left the military we would spend five very important and productive years in the Land of Lincoln. I would come to realize that the U of I in the middle of the flat and featureless prairie of Illinois was a magnet for exceptionally brilliant and gifted intellectuals from all over the globe.

“My favorite characterization after several years in Champaign-Urbana  was 'there were more geniuses in this small academic community than any other small town in the world, with the possible  exception of Novosibirsk, the Russian missile center in Siberia. Illinois was the center of the world for a large number of academic disciplines and drew international students from every continent.

“During my time in the military, I realized that a significant number of my colleagues in the Corps of Engineers were choosing the University of Illinois for advanced study in engineering. In the area of civil engineering, it became clear that Illinois was at or near the top. This became even more obvious during my time at the Technical University in Munich. Illinois was far and away the most highly regarded engineering school in the U.S. in the opinion of those students or faculty members in Europe hoping to study or do research in the U.S.

“During Nathan Newmark’s tenure as head of the department, Civil Engineering at Illinois was widely considered the world’s foremost program. We students were surrounded by pre-eminent professors and researchers in the areas of construction, structural analysis, geotechnical engineering, hydraulics engineering and water resources, environmental science and photogrammetry.

“The great age of American literature in the early 19th century was called the ‘New England Flowering.’ The literary heroes of the time —  Longfellow, Hawthorne, Melville, Emerson, Thoreau, Holmes and others — were clustered in and around the Boston area. Newmark’s  time at Illinois was the great Civil Engineering flowering of the 20th century. As students, we were privileged to work with the giants of the Civil Engineering sub-disciplines — Newmark in numerical methods, Peck in Geotechnical Engineering, Ven Te Chow in hydraulics and hydrology, Munse and Gaylord in steel construction, Hall and Khachaturian in structural analysis, Fenves in computer applications and many others — a Pantheon of great Civil Engineering teachers and researchers.

“During our 5-year stint at Illinois, the famous sci-fi film ‘2001: A Space Odyssey’ was one of the top movies of the day. In one of the critical scenes in the movie, an astronaut named Dave tries to shut down the super computer which is attempting to take control of the flight to Jupiter. In this scene, the astronaut has located the basic code at the heart of the computer. The audience at the small theater in Urbana where we saw the movie cheered when the super computer gives its birth certificate as follows: ‘I am a  HAL 9000 computer. I became operational  at the H-A-L plant in Verbana (of course this was Urbana), Illinois on the 12th of January, 1992.’

“This was Hollywood’s validation  of the reputation of the University of Illinois as pre-eminent in the field of computers. And of course, under Newmark's leadership, Civil Engineering was at the cutting edge of a number of major breakthroughs in the use of computers for Civil Engineering applications.”