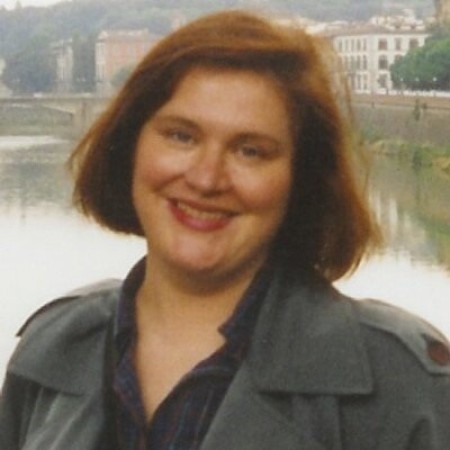 For as long as she can remember, Elizabeth Austin had her heart set on a career as a newspaper reporter, not an editor.

So, for the life of her, she couldn’t understand why the UI’s College of Communications insisted she enroll in Professor Glenn Hanson’s typography class.

“I didn’t care about fonts, or page composition, or the number of points in a pica, or any of the other arcane topics we were forced to cover. And I really didn’t understand why the Journalism Department’s most boring class had to meet at the ungodly hour of 8 o’clock in the morning,” says Austin, who now runs her own Chicago area consulting firm.

“When I first stumbled into Hanson’s class, a few minutes late, I was shedding attitude like a virus. Sullen, I silently dared him to teach me something I could use.

“And that’s exactly what he did. Every single day. With unfailing good humor and an infectious passion for typography that converted many of us into lifelong font geeks and design evangelists.

“Even at 8 a.m., Professor Hanson radiated charm. After years of teaching, his witticisms may have been well-practiced, but they were still guaranteed to amuse a classroom full of undergrads. Decades later, my aging classmates still crack each other up by repeated hoary Hansonisms about fur-lined composing sticks and stealing sheep.

“OK, maybe you had to be there.

“Part of Hanson’s charm sprang from the clear delight he took in his students. I remember the day that John Dickison and I decided to wear pajamas to Hanson’s class, to protest the injustice of requiring us to show up so very early in the morning. On the day of the great PJ caper, I showed up almost on time, wearing my fuzzy, bright red footie pajamas. I looked around the classroom for my accomplice and realized that, as usual, he’d overslept.

"So there I stood, without my accomplice, looking decidedly out of place while Professor Hanson roared with laughter at my discomfort. John showed up about 30 minutes later, wearing a long, plaid nightshirt and matching cap.

“By the end of the semester, I was a full convert to the importance of typography – so much so that I wound up taking Hanson’s Advanced Typography class as well. The classwork was extremely challenging, and Hanson’s punitive grading of late assignments made no exceptions for lifelong procrastinators – even those he liked. But each time I slunk into his office to submit yet another late project, I wound up sticking around just to chat.

“One winter afternoon, he was musing about aging, and about how he didn’t feel that much different than he had as an undergrad.

‘I feel like there’s this homunculus inside me that has never really changed,’ he said. ‘I remember once reading that, if you ask people who are just coming out of anesthesia how old they are, they’ll always say, ‘I’m 19.’ That’s how I feel.’

“As I think back to that conversation, so many decades ago, I realize that I’m older now than he was then – and I now know exactly what he meant, because I feel exactly the same way.

“Glenn Hanson shaped my life, and the lives of so many of my fellow students, because he understood that he wasn’t simply teaching typography; he was instilling a philosophy of journalism that was founded on respect for the reader. In Glenn Hanson’s philosophy, a legible typeface, no matter how simple, is better than a fancy font that renders words unreadable.

“Not long ago, I got into a rather heated discussion with a colleague over a PowerPoint slide. My colleague was trying to cram more and more big words and tiny pictures onto the screen, and he couldn’t understand why I was so passionate about making sure that everyone in the room could read and understand every single word and image.

“Taking a deep breath, I explained that our goal was not to fill a slide, but to convey an idea, and that we had a responsibility to make ourselves clear to our audience. Overwhelmed by my zeal, my colleague reluctantly conceded.

“And I thought: ‘Professor Hanson would be proud – and he would agree with me.’”