“As the second Chief to appear after the university’s dubious retirement decision, I was tasked with finding new ways besides the halftime dance to deliver the Illini spirit to fans. My first appearance was in 2010 at a volleyball game at Huff Hall, where our ladies were taking on No. 2 Penn State.

“This was not only my first-ever appearance as Chief, but also the first time the Chief had made an appearance at a UIUC athletic event since retirement, so I was a little nervous about how security would react.

“The plan was to situate myself where I’d have maximum view from the fans, but that meant climbing a flight of stairs to the upper level of seats — right past the front desk, where two yellow-vested security guards stood sentinel.

“As I climbed the stairs, the first guard caught a glimpse of me in his peripheral vision. He was mid-conversation, which he immediately halted as his face suddenly adopted a serious look. He took a purposeful step toward me and then crossed his arms, yelling ‘Chieeeef!’

"This attracted the attention of his fellow guard, who raised his arms high before dropping them toward the ground, repeating the phrase ‘We’re not worthy! We’re not worthy!’” 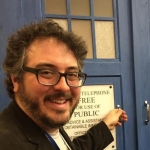