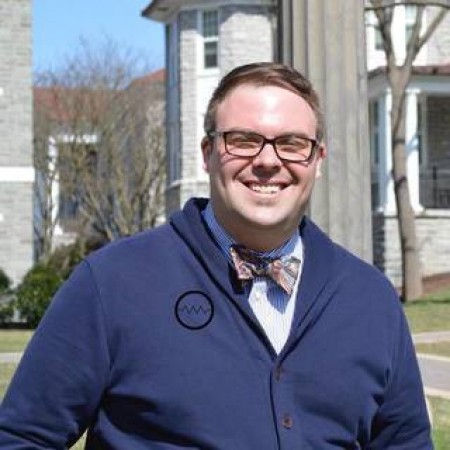 “My wife, Kathryn Rathgeber, and I had both studied at UIUC and even lived a block away from each other — around the intersection of Green and Busey in Urbana — for a while, but we never met until we both had graduated,” says James Madison assistant music professor Jesse Rathgeber (BME ’06, music education).

“We found each other on Match.com and met for our first date at Aroma Cafe on March 14, 2007. We got to know each other a bit sitting outside at one of the small tables and sipping hot lattes until it got too chilly. We moved to the only open seats inside, a leather couch/love seat, and that is where I fell in love with Kathryn.

“That date took us all over downtown Champaign as we played pool at the Esquire Lounge, got drinks at Guido’s, had some dessert at Café Kopi, and walked all around. Early in our relationship, we would explore the Arboretum on Sundays and sit together at the Japan House.

"We took in concerts at the Canopy Club, the Highdive and Krannert. We danced together at the Highdive and C-Street. We filled up at Papa Del’s, Zorbas and Li’l Porgy’s. We stocked up on movies at what That’s Rentertainment and Hollywood Video.

“I asked her to marry me at our apartment at Ashton Woods. We eventually moved to Arlington Heights after a little over a year for jobs and graduate school but we planned our wedding to take place at UIUC. We booked Foellinger Auditorium for the ceremony — we got married literally on the echo point — and the Union Ballroom for our reception.

“On the day of the wedding, we got pictures at many UIUC spots, including the Eternal Flame and Alma Mater, which was still green with patina then. Our reception was in the late afternoon so that we could sneak away with friends afterward to Murphy's Pub for toasts and Irish nachos. To say that UIUC and Champaign-Urbana are special to us is an understatement. It is where we fell in love, dedicated our lives to each other, and is a place we always feel at home.”

1. “Working with Dr. Sam Reese of the School of Music in a music education methods course.”

“Dr. Reese is a wonderfully warm and creative man and that radiated through his teaching. In his class, we explored guitars, hand percussion and technology — including the then-new Apple GarageBand app — to consider how these tools and associated practices might fit in general music classes in schools, but it was Dr. Reese’s focus on creativity that really imprinted on me.

“I was a young guitarist/singer in a jam band who had written songs and played with sound for as long as I could remember, but I hadn’t really considered focusing on creativity in my teaching until I met Sam Reese. I also learned a lot about what it meant to ‘be there’ for students.

"Dr. Reese was really there for his students: he attended our performances at Krannert as well as at places such as the Canopy Club; he was always ready to sit down and chat at Espresso Royale about school and life; he encouraged us in and out of his class to be brave and to play around as teachers.

“I’ve taught at nearly all levels of education at this point — from early childhood to graduate school and am now an assistant professor of music at James Madison University — and I still catch myself and smile when something Dr. Reese shared with me or that we thought up together lives out or comes up in my classes. Dr. Reese was one of the people that made my time at UIUC so special.”

2. “Working with Dr. Joseph Grant of the School of Music.”

“Dr. Grant — or ‘DG,’ as we lovingly called him — taught choral methods and conducting classes for music education majors at UIUC when I attended. Dr. Grant had a caring, challenging and humor-filled style of teaching that really resonated with me.

“I was a general music education major at UIUC, focusing on working with young children in mainly nonperformance-based settings, but I took many classes with choral music education majors and, as such, I took many of Dr. Grant’s classes. To be honest, I was not initially thrilled about the idea of these classes as I didn’t see them as connecting with who I was or what I wanted to do. But, then I came to the first class on the first day and my mind had changed.

“These classes were about connecting with, communicating with and supporting people through music, and that’s something that Dr. Grant made clear to us. He also made it clear to us that we mattered as people and that we should celebrate what made us unique.

“I distinctly remember one afternoon coming into class in the Music Building fishbowl and he was nowhere to be found. Class started and in came Dr. Grant with an armful of newly collected fallen leaves with vibrant color, no two alike. Dr. Grant walked up to each of us as we sat in the chairs and grabbed one specific leaf to place in our hands. After all the leaves were dispersed, Dr. Grant chatted with us about how each of us, as people and as teachers, were like the leaves he gave us: no two of us were alike.

“That class we talked about what made us unique and how to embrace that as teachers and humans. I still think about that today and how moving it was and is. Dr. Grant was a UIUC institution for me and many others.”

“I had always loved Miles Davis’ music, but I didn’t understand what I heard. So, when I noticed that in there was a class on Miles Davis offered in the spring of 2002, I jumped at the chance to take it, and brought along my friend, Ronn V.

“The textbook was Davis’ autobiography and in the class we discussed the forms, players and influences on/of Miles Davis’ music. The professor was Joan Hickey and she made this 8-10 p.m. class exciting and relaxing. Every Tuesday night, we would gather together in the basement lecture hall of Smith Memorial Music Building to learn and chat.

“Now, I had been a fan of Davis’ more out-there music up to that point, but Professor Hickey really opened my eyes to all of Davis’ music, including older versions of standards. One night, we walked into the classroom and the lights were dimmed; Professor Hickey was sitting at the piano. She welcomed us to circle around the grand piano and she taught us about the song ‘Bye Bye Blackbird.’ We listened to a few versions and then she taught us to sing the song with lyrics.

“We sang and she played; at that moment, I remembered why I loved music so much as I was able to connect with others in and through music. We went back to listen again after singing and I heard new things I had missed before. So, I picked up an important pedagogical trick as well as having a meaningful experience that evening.”

4. “Visiting the Sousa Archives and Center for American Music in January of 2018.”

“I work as an assistant professor of music at James Madison University and I have the opportunity to teach our Intro to Tech course for all incoming freshmen music education majors.

“After my first semester, a ground of five students wanted to do something more with the content and so we planned and proposed a session on Tinkering through Music with Technology for the Virginia and Illinois music educators association conferences.

“I drove us all to Illinois at the end of January to present and decided to stop in Urbana-Champaign to give the students a little tour, and a break. We ate lunch at the Courier Cafe, toured the Quad and the music/arts buildings. Right at the end of our stop, I decided to take them to the Sousa Archives. We arrived with 15 minutes to spare and met Scott Schwartz. Scott asked us what we were in town for and after hearing ‘technology,’ he led us to the electronic music exhibit.

“Scott spent well over an hour-and-a-half giving hands-on demos and explaining the different instruments to all of us. The students were enamored and still talk about it regularly. Before we left, Scott made sure to show some Sousa artifacts to the students and to play early Sousa recordings while explaining the technological innovations and limitation of the recordings and players.

“It was certainly a highlight of our trip and we talked about it all the way up to Peoria and some of the way back to Virginia a few days later.”