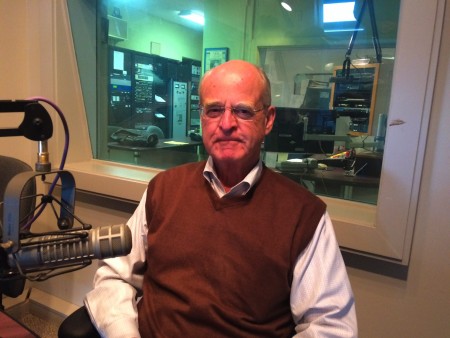 What it might have been missing in high-tech and high-rises, the UI that Jim Nowlan experienced half a century ago more than made up for in other ways.

“Ah, the early ’60s, a great time to be in college, especially in Champaign-Urbana, and especially for a country boy from the corn fields of central Illinois,” says the man of many titles (author, publisher, strategist, lawmaker and professor among them) and holder of many UI degrees (bachelor’s, master’s and Ph.D., all in political science).

“The campus was exploding with growth, and students were brimming with optimism about our futures.

“The Greek system was in vogue. At Sigma Nu, we were required to wear jackets and ties to dinner every evening but weekends. Our house mother was escorted to the dining room ahead of us by our president, and we serenaded her with a couple of syrupy fraternity songs before, or after, we dined.

“The house had a fine Dixieland band, which played Kam’s basement and won a competition at the Lincoln Hall Theater, among other fraternity Dixieland groups.

“I enjoyed listening to Ollie — an old, we thought then, African-American — pound the upright piano to lift his notes above the din of college beer drinkers at the TI (Tumble Inn), a pretty rough tavern on the north edge of downtown Champaign, as I recall.

“Undergrad liberal arts majors had to arrive early to get a seat at the Lincoln Hall Theater to hear the sparkling lectures by American diplomatic historian Norman Graebner.

“As a graduate student, I had the privilege of sitting with just a dozen others as Graebner led a captivating seminar on the topic. The young professor stimulated this yokel, who hadn’t been east of Indy at the time, to think big thoughts about a larger world I would want to jostle with in the years to follow.

“Later — actually, the early 2000s — I reveled in the energy, intelligence and ambitions of my Civic Leadership Fellows. The program, just a memory today, provided social and academic enrichment for a dozen selective, obviously talented seniors from across campus.

“I recall a memorable trip to Mexico City during a run-up to their presidential election. We met with Mexican leaders, and bonded — and partied, and stayed out too late — with young Mexican politicos running for Congress.

“The U. of I has been very good to me, and for me. Thanks for the memories."