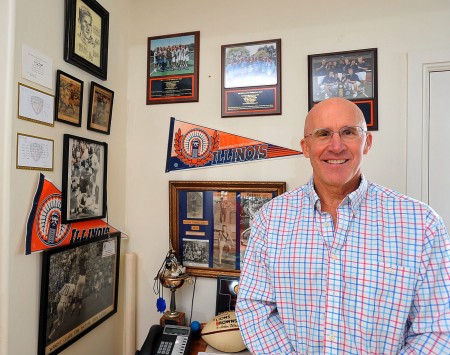 John Wright's happy place is one that hasn't seen much action in recent years — at least not by students wearing orange and blue helmets.

“I have many wonderful memories of various spots on our great university’s campus. But without question, my number one spot would be the exact same spot that both my father, Robert Wright, and my son, John II, would also choose, which would be the 4,800 square feet of turf that grace the end zone of Memorial Stadium after scoring a touchdown.”

A second-round draft pick of the Detroit Lions, few in Illini history were better at finding the end zone than Wright, whose 12 visits after a catch are still tied for seventh-best, half a century later. Of the six Illini ahead of him, all played in the pass-happier era of college football: the 1980s and beyond.