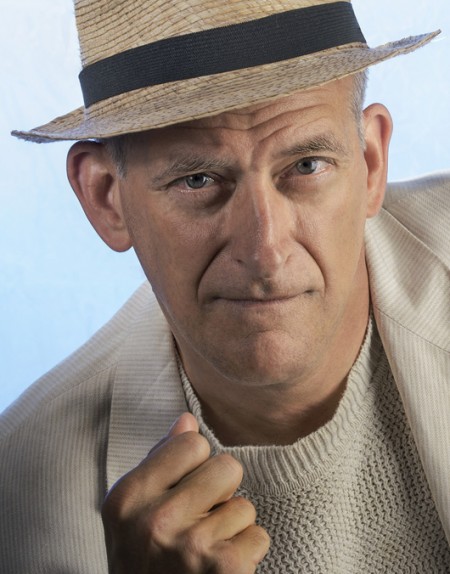 His 38 TV/movie roles have included a funeral priest, a bartender (twice), a butler, a viking, a pirate, a bum, a bandit, a mental ward patient and an extraterrestrial humanoid from the planet Romulus.

“Perhaps my fondest memories are of the Scott Hall basement, the Union Ballroom and the campus YMCA auditorium, where I attended different ballroom dance classes, formals and workshops with the famous Ms. Aurora Villacorta," the 1978 UI grad says.

"Thanks to her teaching me the East Coast Swing, during my college career, I won a number of very amateur dance contests on and off campus. She heard, through a mutual friend and fellow student, that I was coming to town on a visit two summers ago. She insisted on seeing me and had remembered me from some 35 years after my last class with her.

"So, I joined in on her day’s group lesson on tango in the Y Ballroom. A wonderful, generous woman.

“Another memory: As a then non-theater major, auditioning for Krannert theatrical productions and attending dress rehearsals before the show opened, entering production level through the stage door, even though I was a communications/advertising major.

"For one all-department audition day, alongside theater majors, I brought the house down with my own uninformed improv and storytelling. Afterwards, a grad theater TA grabbed me on Krannert’s lower level and plotted to do some performance together; that never did happen.

"From that audition, I actually landed the role of MP in the 'House of Blue Leaves.' During another walk-on bit as a villager in 'Greensleeve’s Magic,' the director corralled me into standing in for the silent sailor during dress rehearsal when the lead actor fell ill.

"He had no lines so it was easy, just flowing with the play’s blocking — asking each other actor during the show where I needed to go to next — and having reactions to those characters. I remember it got a lot of laughs, and people congratulating me afterward backstage that they had cast the wrong guy, a theater major.

"He got well really fast the next day for the show.

"Who woulda thunk I’d be in Hollywood today — where I’ve run into fellow classmate Alan Ruck, star of 'Spin City' and Geena Davis’ husband on the 'Exorcist.'"