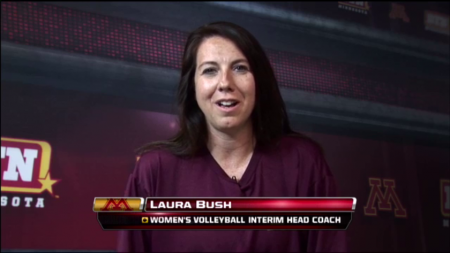 As the most highly decorated volleyball star in a state full of them, Laura Bush had her pick of blue-blood programs coming out of Stewardson-Strasburg High in 1987.

The future Auburn and Marquette head coach chose none of them — to the surprise of everyone, including the coach who landed her.

Bush’s memory of signing day eve goes like this:

“I called Mike Hebert in the middle of the evening — around 9:30 — to tell him. I could tell I probably woke him up; he didn’t even sound like he knew who I was. So that didn’t make it a very special feeling, when you’re 17 and about to make a decision like this. I was very nervous.

“So I said again, ‘Hi Mike, this is Laura Bush.’ He’s like, ‘Ohhh, Laura Bush.’ Me having no aptitude for speaking on the phone, I just spilled it out: ‘I am coming to the University of Illinois.’

“There was this very long pause. He said, ‘Tell me that again.’ I said, ‘I’ve decided I’d like to play volleyball for the University of Illinois.’

“The next morning, when I called Stanford, which had been my top choice, I remember the tone of voice (then-coach) Don (Shaw) had. He said, ‘You’re going where?’ and ‘Why?’

"I said, ‘They can give me everything I want.’ He said, ‘Do you realize that not everyone gets a chance to pass up a Stanford education?’ I said, ‘I guess I’m just country enough that I am.’”

Bush, a former assistant coach at Michigan State and Minnesota, remains one of the UI program’s all-time greats — the teams the 1990 Dike Eddleman Female Athlete of the Year played on went 109-31 with two Big Ten titles and back-to-back Final Four appearances.