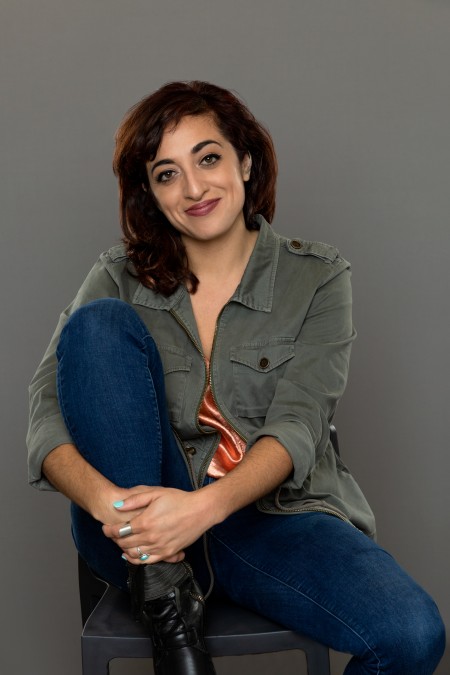 Luxurious, it was not. But that itsy-bitsy Urbana “studio-and-a-half” Natasha Samreny called home for her last year of grad school is the one of the first spots that comes to mind when she thinks back on her Illini experience.

It was just east of Lincoln, “with no doors and a weird little half room on the side where I’d stick my books and notes when I wasn’t studying,” says Samreny, a Florida comedian who in 2010 earned her master’s in Middle Eastern studies from the UI.

“The shower was only a shower because I put a curtain on it. It barely fit one person — I tried.

“But the kitchen was everything. I wasn’t a cook then, so it was perfect for me. No counter space and you risked catching your sleeve and setting the whole damn place on fire if you turned too quickly from the stove to the fridge.

“But it was mine and I made some of my sweetest, saddest and proudest memories there, including taking my writing exam to graduate from the program: 24 hours, no sleep and a line of 2-liter Coke bottles next to my own mini stacks. That’s the closest I ever got to a mad rush in grad school.

“When I left, I posted the little kitchen cart I’d bought on Craigslist back on Craigslist. It had served me well as a rolling countertop and reminder to try and cook something outside of my Crock-Pot once in a while.”

Despite the tight squeeze, it was an upgrade from where she lived during her first year of grad school.

“When I first landed in Champaign, I slept on the floor of a new friend’s apartment on White Street. I e-mailed my mom with the address so she could mail some stuff and she freaked.

“She and her brother had lived in the same building, in the exact same apartment unit when they attended. I had no idea. I was sleeping, waking and walking the same footsteps to the little bathroom that she had 40 years before.

“Of course, I hated beer too much to rival the beer can walls my engineer uncle would build. But still ... sacred grounds?”

Now an oral historian on the side, Samreny found another spot on campus that more than satisfied her voracious appetite for reading — the Stacks.

“I’ve always been a bookie. Less in the DeNiro or ‘Oceans Eleven’ sense. More in the deep need to regularly hole up and heal up among the sacred space of books; to welcome the smells and melodies of countless writers to settle and swirl around me, handling time and making me feel small.

“The Stacks in the library were quiet enough to mellow the volume in my head, but hot enough to keep me awake as I looked for the week’s lit; watching my feet in the shifting darkness between forgotten piles on the ground.”