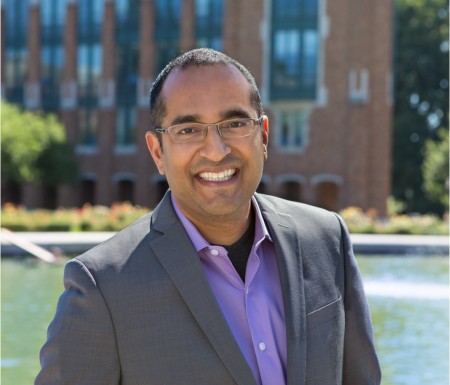 The UI provided Vikram Jandhyala with more than the engineering education that would lead to a career in academia at the University of Washington.

It also was where he took up what was at the time a favorite hobby but became something much bigger.

“The IMPE building — what an awesome place for sports. That’s where I learned to play squash, a game I played for the next 20 years, including twice at the U.S. nationals,” says Jandhyala (MS/Ph.D. ’98), now the vice president for innovation strategy and co-CEO of the Global Innovation Exchange at the Seattle-based UW.

“And the Krannert Center — especially the studio plays — (provided) such a wonderful way to relax and broaden your mind beyond our amazing engineering research and education.

“I’ll add a third place: We had a cricket team that played at the grounds in Orchard Downs. Very memorable games with other universities and clubs.”