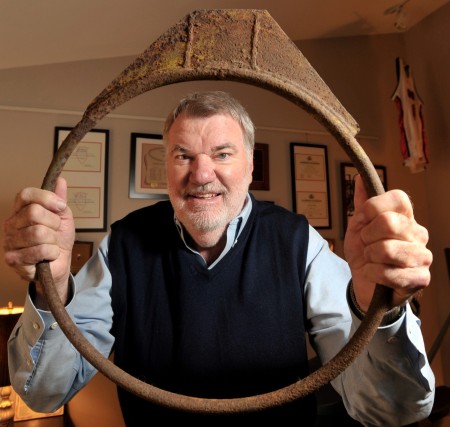 Among the stops on Canton High School hot shot Dave Downey’s official visit to the UI was an off-campus spot he’d wind up growing to love: Po’Boys, owned and operated by Arnold “Arnie” Yarber, the UI’s one-time athletic trainer.

“A little-bitty building” at 58 E. Columbia Ave., as Downey remembers it, but one that served food to die for.

Not a big menu but one that Downey sampled often over the years as he formed a lasting bond with the late Mr. Yarber.

In their early years, “as I got to know him, I found out he was kind of a counselor and contact for the black athletes because in those days, there weren’t any other black students,” Downey says.

Often with an assist from his friend, Downey himself would go on to play a key role in helping bridge the divide that existed back then in what he says “was not a real liberal community.”

He and Arnie became “especially close during the civil rights era,” with Downey saddling up to the Po’Boys counter and talking about the lack of black coaches and, later, local race relations for hours on end.

“Once I got out of school, he continued to be a friend. It was an important part of my life — and I think, important to him — to have that bridge between the business community and the black community,” says Downey, who was asked to speak at his friend’s funeral in 2007.

“Since my first trip to Po’Boys, he was always a good friend. It was just natural for us.”