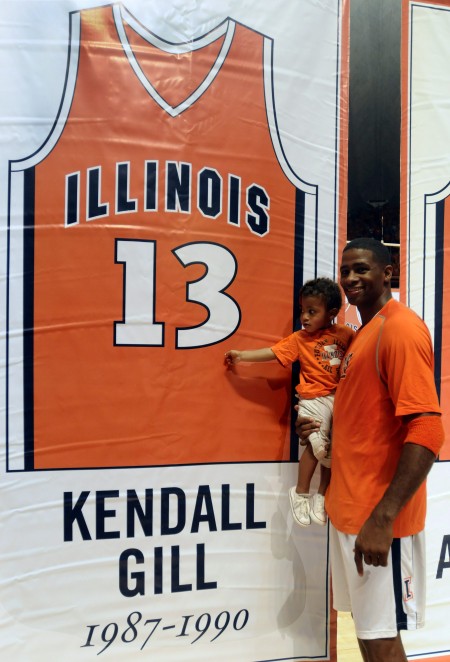 He had Kendall Gill.

“Every morning, I’d wake up to the sound of ‘clink, clink, clink,’” says Small, who came off the bench for the 1988-89 Illinois basketball team. “It’d be Kendall lifting those weights.”

Oscar Madison was Roommate of the Year compared to the Flyin’ Illini’s fitness fanatic, who at age 49 can still be found sparring in boxing rings, then posting the videos on social media.

Living with Gill took more out of Small than the games themselves.

And you didn’t want to be anywhere near Gill when Michael Jordan and the Bulls were on.

“That guy had us watching Chicago Bulls games on film all night,” Small says. “He’d be like, ‘Hold on, hold on. Rewind it. Did you see his foot? Look how his foot is.’ I mean, it’d take 10 minutes to go over one play. ‘Hold on. How’s he wearing his wristband? Where’s his wristband at?’”

With Gill, it was always all about getting bigger, stronger, fitter, faster — things that’d look good on his NBA resume.

He wasn’t into bar-hopping or junk food or lounging around on the couch.

“Kendall had a dream and he was always chasing that dream,” former teammate Lowell Hamilton remembers. “He was determined to make that dream a reality. He didn’t mix with anybody that was questionable in character or anybody that would get him off his program. He didn’t drink, he didn’t party, he didn’t do anything.

“He was the ultimate example of the perfect athlete.”

He arrived on campus in 1986 with a waif’s waist, linguini for legs and a shaky shot.

“And nerdy,” says Hamilton, who took Gill around on his official visit. “He was very nerdy.”

He wasn’t Mr. Basketball, like Nick Anderson. He wasn’t News-Gazette Player of the Year, like Larry Smith. He wasn’t a McDonald’s All-American, like Hamilton and Marcus Liberty.

“I wasn’t the most highly sought-after recruit they had, by any stretch of the imagination,” Gill says. “I can remember coming into the Varsity Room for Media Day right before my freshman year and nobody even knew who I was. I just sat in the corner and watched Nick and Steve (Bardo) and Larry Smith and those guys get the accolades. My hometown newspaper didn’t even come up to me.”

He left four years later with a body by Jake, a Big Ten scoring title and a high-paying job.

He played 14 NBA seasons and now gets paid to talk about basketball as a Chicago Bulls analyst on CSN.

“In life, I’ve always been the one that’s had to prove himself,” Gill says. “I overcame a lot of things just by working harder than everybody.”