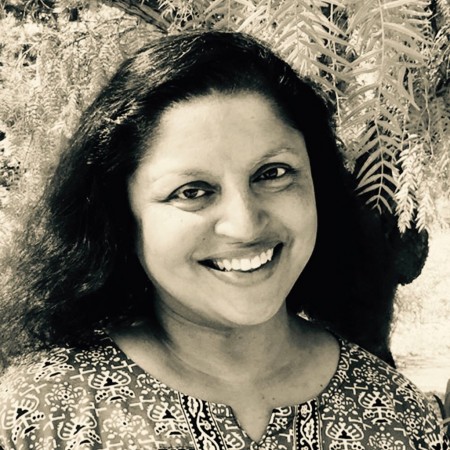 Author, poet, photographer | Debut novel: ‘The Atlas of Reds and Blues’ | Class of 1992

This Illini memory is dedicated to the memory of Devi Laskar’s no-doubt-about-it No. 1 UI classmate.

From the San Francisco Bay Area, the budding novelist writes: “My favorite memories of U of I always include my best friend, Susan Freiburg — she was a Ph.D. candidate in social work.

“She was always encouraging me to participate in charity walks and 5K runs and we spent a fair amount of time at the arcade and at Murphy’s and Papa Del’s and the farmers market in the parking lot of the Urbana mall.

“She and my husband co-founded the BOAST program in 1991, which paired graduate students with low-income students to instill a love of science and STEM. They received NSF funding.

“Susan died of complications from leukemia treatment in 1996 — but BOAST has lived on and is now a permanent after-school resource center for low-income children in Champaign.”

As for the campus where in 1992 she earned her master’s in South Asian Studies, Laskar says, “U of I holds a special place in my heart.

“My late father-in-law, Amulya L. Laskar, received his Ph.D. in physics from U of I and worked with Dr. John Bardeen.

"My mother-in-law, Renu C. Laskar, received her Ph.D. in mathematics from U of I and became the first female faculty member at any IIT in India. She later came back to the U.S. and taught at Clemson University for 38 years before retiring.

“My husband, Joy Laskar, received his Ph.D. in electrical engineering and went on to teach for nearly 20 years before becoming a full-time entrepreneur in 2012.”

And Devi? The former newspaper reporter in Atlanta, Honolulu, Florida and Danville published her debut novel — ‘The Atlas of Reds and Blues’ — in February 2019.