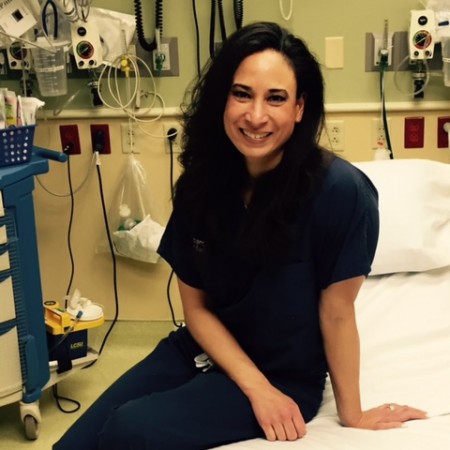 “Our volleyball team was a very tight group,” she says. “I was invited on my first spring break. Megan Stettin and I became the best of friends as roommates as the team freshmen. Amy Jones, ‘Jonesy,’ and Kristen Henricksen, ‘the Hen,’ were also our buddies. We packed our swimsuits and I insisted on bringing my winter coat. We piled into Jonesy’s Saturn and we were off. Benefiting from our youth, we drove straight through.

“Spring break of 1993 entailed a very long drive to Marco Island, Florida. This is a sleepy place but with amazing views and it had an ocean. I was with great friends and a beach. I could not ask for more. I was 18 and came from a conservative family. We had to have chaperones. Hen’s brother, Steven, and his best friend, Mike, met us there to keep us out of trouble.

“Hen’s father was overseeing this all. Hen had a few friends down in Marco Island. The time was spent on a boat and playing sand volleyball, of course. Our competition had no idea what hit them. We had a pretty competitive lineup with all of us in our prime of our volleyball careers.

“The fun was over and it was time to head back. Our next volleyball practice was around the corner and we knew they were going to work us hard. We had another Big Ten title to win. Little did we know as we were driving north that Armageddon awaited us. The great blizzard of 1993 loomed ahead.

“Jonesy could have had a career as a professional stunt driver. Megan asked, ‘Why aren’t we moving?’ The snow surrounded us and it looked like a parking lot. We didn’t move for hours. I could hear my mother’s voice: ‘You are going to freeze to death.’

“It was time to hike it back to the exit we just passed. I was very grateful for the winter coat I packed but our footwear included cheap tennis shoes. We were packed for Florida, not the Antarctic. We made it the exit and found a Waffle House, hotel and convenience store. The power was out. Rooms were sold out at the hotel. We could buy anything cold at the Waffle House. To this day, I have yet to eat there again. Like a Pavlovian response, I pass one and it is viscerally off-putting.

“This blizzard was declared a national emergency. People died in the mountain passes. I knew we were in trouble when the people in the south were driving in the snow. The plow trucks we passed were flipped over. I wanted to offer my two friends from Chicago to take over for them but the plows were abandoned.

“It was time to call home. Even in college, we still reported to the adults in our lives. We had waited in line and Megan called her mother to start a phone chain to the other parents. Rita Stettin is a get-it-done type of person and we knew she would be waiting by the phone. We had a few more coins. Of course, we had to call the coaches. This was delegated to Hen and Jonesy. There would be no mercy and no forgiveness. We better figure out how to make it to practice.

“The night was survival of the fittest. Hen and I scored a love seat with my big coat. It was supposed to seat two and with her around 6 foot, it was a challenge to fit. I have no idea where Jonesy found to lay in the lobby of a booked hotel with dozens of people stranded. But she is a survivor, so I worried little. Megan scored a tablecloth and snuggled up under a table. Chili was flown in. Even in dire circumstances, Megan’s disdain for chili did not waiver. We survived the night.

“We made friends with a softball team from Florida. They were less prepared for the weather than we were. At least we had socks on.  But we were frozen. All athletic teams travel with plastic bags to ice after games. We bartered with them. Crackers were exchanged for plastic bags. We put the plastic bags under our socks and we were off. We waited forever in the convenience store line to see if we could find supplies. I commend that local community near Dalton, Georgia. They knew people were stranded and even though half the power was off, these folks opened their doors and still conducted business. I am forever grateful.

“Outside the convenience store, we planned our escape. I learned never to hitchhike. Extreme circumstances call for extreme measures. A group of guys were standing outside a van in the parking lot. We took the plunge. Trepidation flooded the inside of the foul-smelling carpeted van that looked very similar to the Mystery van from Scooby Doo. Even the driver looked like Shaggy.

“The other men in the van looked high, now that I can recognize that look, working as an ER doc. The four of us girls huddled in the back wondering why the van had carpeting on the walls and hitched a ride with some strangers to get us near all of the parked cars on the highway. I remember having my hand near the door handle and planning how to attack if there was any funny business.

“We walked the rest of the way to Jonesy’s Saturn. Drivers from semi trucks walked about. They saw us girls trying to push the car out from the snow and ice. Jonesy was very particular about her vehicle. I will never forget the look on her face when we convinced her to try to let one of the semi drivers give it a go. There was smoke and ice flying. Jonesy paled as these men rocked her beloved car and broke it free. They were effective but not gentle.

“Then the epiphany came. We were desperate. Was it worth risking our lives to make it back to practice? Absolutely. I saw that the southbound  highway did have a vehicle or two pass the day before and looked a lot better than the northbound highway we were imprisoned on.

“Let’s cross and drive north on the southbound highway,” I said.

“We set a trend. We had a caravan of vehicles following us. Let’s just say we were lucky. We made it to last call for quarter beers wearing white shirts to show off our tans and meeting with friends to share our saga.

“These are the stories I think of when I talk with my stepkids and tell them to ‘never do that.’

“Life is an adventure!”