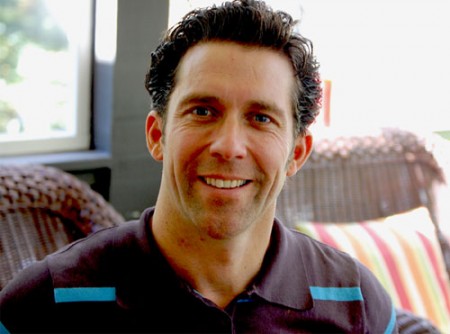 He can’t say for certain whether he’d have made a Paralympic team without the coaching he got from Marty Morse and Brad Hedrick at Illinois.

But this much, Scot Hollonbeck is sure of:

“I would not have been a world champion, multiple medalist or made four consecutive Olympic and Paralympic teams without them,” the 1993 Applied Health Sciences grad says from Atlanta. “More importantly, I would not be the human being I have become without both of them as mentors and guide stones in my life.”

Their bond goes back to the 1980s, when a 14-year-old Hollonbeck was struck by a van while bicycling to swim practice at Rochelle Township High. While recovering in the hospital, he happened to catch a wheelchair race on TV, where Hedrick’s wife, Sharon, broke the world record in the 800 meters.

A top runner himself, Hollonbeck had found his new sport. He attended his first UI summer camp for disabled athletes a year later.

“Intellectually, they set a very high bar, they infused giving back and service to others, they expected us to be involved in student service groups, student government, fundraising and being honorable ambassadors of the university and disabled sports programs. They designed fitness and training programs that produce world-class athletes to this day.

“I still have dreams of rolling around the Quad on perfect spring days and training around campus as the autumn leaves burst with color. What a privilege and honor it was to further my education at the University of Illinois.”