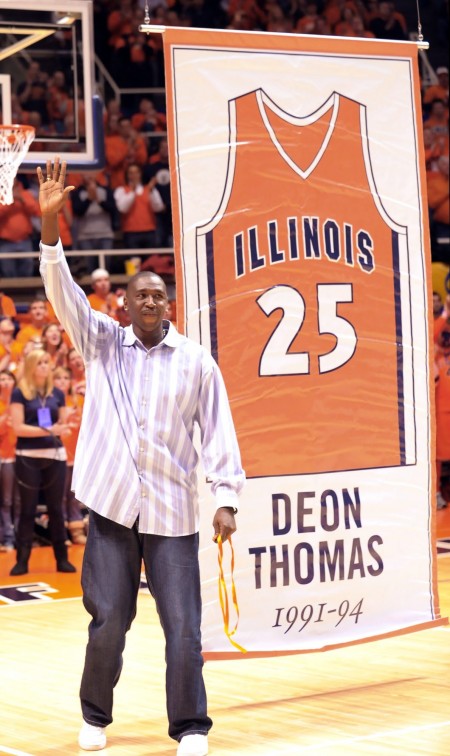 Here's a quick story about UI baskeball's all-time leading scorer, Deon Thomas, who, 23 years after turning in his uniform, remains as beloved around here as he was during his playing days.

“I am on the committee to plan the steak and burger dinner for the Don Moyer Boys and Girls Club. Last year, we asked Deon to be the keynote speaker, knowing how much the adults and the kids in the room would love to hear his stories about his days as an Illini.

"He accepted the invitation and we were thrilled. I had no idea how thrilled I’d be.

“As emcee, I got to introduce number 25. He started to speak and stole the show. Not only did he talk about his days on the court, but the entire audience was riveted as he talked about growing up in Chicago and his time at the Boys and Girls Club.

"What was especially moving was how he connected with the kids. They could see themselves in him. It was really powerful and I am so grateful I was there.

“I know for a fact that we raised more money that night because of his emotional and inspiring words.”

In addition to his analyst roles with the Illini Radio Network and Big Ten Network, Thomas was hired in November 2017 as community relations coordinator with the UI's Office of Governmental Relations, based in Chicago.