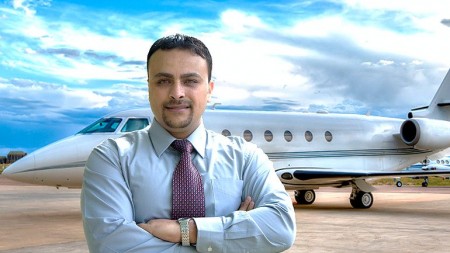 Anyone looking for Ahmed Abukhater during his days as an urban and regional planning master’s student could usually find him in one of two places.

There was the obvious one — the second-floor computer lab at Temple Hoyne Buell Hall, where he prepared for a career in technology that's led him to Denver. There, he's Boeing's point person for digital flight optimization, navigation, airspace and crew.

And then there’s the campus rec center, where Abukhater prepared for the other focal point of his bio.

Three years after leaving Illinois, he became the first athlete to represent Palestine at the — and this is a mouthful — World Association of Bench Pressers and Dead Lifters’ Powerlifting Championships in Las Vegas.

“I also vividly recall the long runs around Urbana and Champaign I used to do late at night, where I can still feel the brisk breeze brushing against my face that added to the excitement of the experience,” Abukhater says. ‘What a wonderful feeling it was."