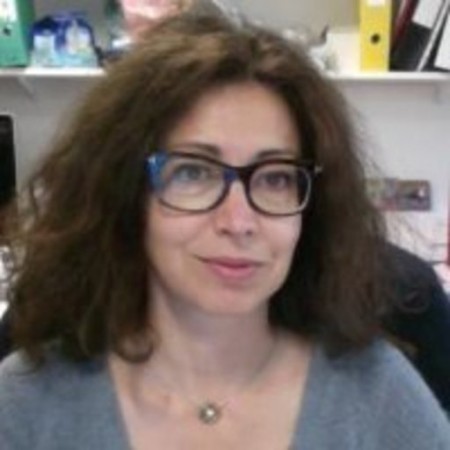 Computational biologist | Bioinformatics of the UK | Class of 1999

She hails from Rome, now lives in London and still misses Urbana, where she spent parts of three fascinating years in the late ’90s as a fellow at the National Center for Supercomputing Applications.

“I was very happy when I arrived in Urbana — beautiful ancient trees all around, squirrels and rabbits in the backyards and streets,” computational biologist Gioia Altobelli writes from the UK.

“The NCSA Laboratory of Computational Biology was located at the fourth floor of the Beckman Institute for Advanced Science and Technology. From outside, it was an imposing, long building with four or five towers of different heights disposed asymmetric around a much taller one.

“The Beckman soon became ‘The Castle’ in my everyday conversations. In retrospect, I would say that it looked like a modern Basilica, rather then a castle, with its long rectangular base ‘a croce latina’ with a central nave and aisles. After all, isn’t ‘Advanced Science and Technology’ the religion of our times?

“The Beckman was spacious and impressive inside as much as from outside. There were drinkable water fountains at each floor — a real perk for me — to match a lovely large fountain outside. There were wooden benches in the garden outside, where we’d sit near the roses in spring and read the scientific papers, as much as in the nice desks inside.

"On the fourth floor, there were paintings on the walls and multiple SGI computers in the CompBio laboratory. Even more impressive was the mesmerizing virtual reality laboratory. A computational help desk was available 24 hours a day. I visited and attended various series of seminars — I particularly loved the lunch time NCSA’s one, which were supported by loads of delicious pizza.

“One evening I left work and slowly head home to North Busey Ave. Just outside the Beckman Institute, I started a lovely conversation with some young squirrels. I did not notice that my boss was approaching me, though:

“What are you doing Gioia? Are to talking to the squirrels?" he sharply thundered.

“Well”, I said “yes I am, but unfortunately they do not speak Italian.

“I was very sad when I left Urbana.”