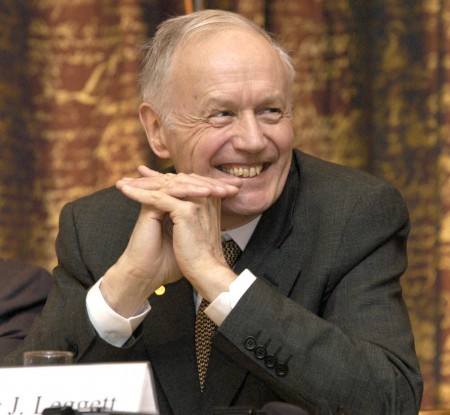 Nobel-winning physicist | On UI faculty since ’83

The bridge over the Boneyard, in the parking lot to the east of Loomis Lab, is where Sir Anthony Leggett — 2003 Nobel-winning physicist and UI faculty member for closed to four decades — had a breakthrough.

“This is where the idea came to me for the experiment which my colleague Dale van Harlingen was eventually able to do to resolve a crucially important question concerning the high-temperature superconductors,” says the John D. and Catherine T. MacArthur Professor of Physics.

“The idea wasn’t quite as original as I thought at the time, nor is it directly related to the Nobel Prize, but it was still quite satisfying.”

Leggett, who added the “sir” to his name when Queen Elizabeth II knighted him in 2004 “for services to physics,” came to Illinois by way of England’s University of Sussex in 1983.

Among the best pieces of professional advice he’s ever been given came that same year, when his then-3-year-old daughter urged him to accept the offer from the UI, where he’d been a post-doctoral researcher in 1964 and ’65.

“What she actually said, on our return to the UK from a five-day inspection trip, was ‘I want to go to America,’” he says.

In March 2020, it was announced that Leggett had donated his papers from more than 50 years of groundbreaking research and teaching to the UI Archives.

From 2009: Getting Personal with a Nobel Prize winner
From 2003: The scene in Stockholm as Leggett presents Nobel lecture