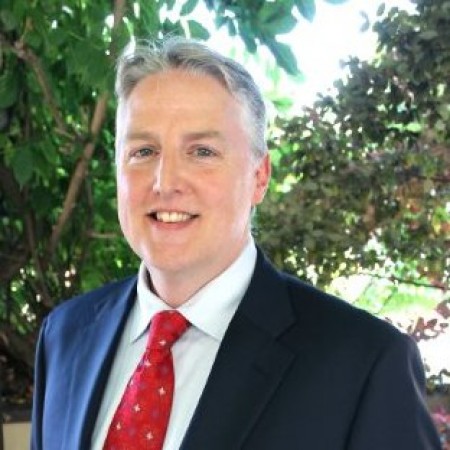 He arrived at Noyes Lab on that chilly Saturday morning in 1987, knowing that in a few hours it would be all over.

One last final and future Thomson Reuters general manager Bill McKay ('90) would have satisified his language requirement and could move on to the courses he wanted to take.

"I located an empty seat in a lecture hall in Noyes Lab and waited for the TA to arrive. Funny thing was, I didn’t see any familiar faces as other students streamed in and took their seats. After a while, I nervously leaned over to the dude to my right and inquired about today’s exam."

"Needless to say I immediately scooped up my jacket and bolted out of the lecture hall. I was pretty certain this was the day of the test but had no clue now where it was being held. It was 7:50 a.m. and the exam was scheduled to begin sharply at 8 a.m.

"What do I do? I ran as fast as I could to the Foreign Language Building to see if someone — anyone — could help me.

"At this early hour, to no one’s surprise, FLB is a ghost town. I’m nervously praying for an angel to save me. As the minutes tick down, I can feel a major Kopfschmerzen settling in just behind my eye sockets when, suddenly, a young Asian woman sticks her head out of an office door.

"At that moment, the FLB became the Gibberish Building as I quickly explained my plight to her. Amazingly, she located a master exam schedule."

Let’s see here. It was in Noyes yesterday. The makeup exam is in Harker Hall and ... starting about now. You’d better hurry.

"Again, I am running — trying my best to not slip on the snow and ice down the Quad towards Harker Hall. Of course, it’s on the complete opposite end. I can hear the bells chiming from Altgeld, marking the top of the hour.

"The foreign language gods were with me that cold morning because when I arrived, the TA was cheerily welcoming other test-takers as he handed out the blue books. Outside, it might have been 30 degrees but I was sweating profusely from all the stress and sprinting.

"I have absolutely no recollection of how I did on the exam that day but I’ve never forgotten the kindness of the woman who helped me at the FLB at my verzweifelte Stunde."