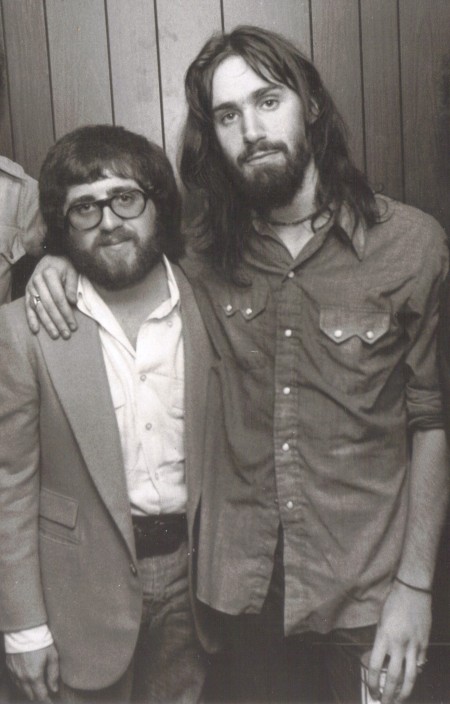 1. His first client was a fellow Illini — the late, great Dan Fogelberg. Azoff left C-U for California in 1970 to promote the then-unknown. (That’s them in the photo, circa the '70s).

“What I remember when I think of those (early) days is that we were just so damn cocky,” Fogelberg told Copley News Service in 1997. “Not arrogant but so full of ourselves that we never ever imagined it wouldn´t happen.

“Because Irving gave us that. He was just brash as all get-out and he gave us that confidence.”

2. As he rose through the entertainment ranks — CEO of Ticketmaster, CEO of Live Nation, manager and agent to the stars — he never forgot where he came from: Danville, IL 61832.

3. Azoff checked out of the UI before finishing his studies but does hold an Illinois degree — an honorary doctorate in music, awarded in 2003.

4. A favorite UI memory: the summer of 1968, when a certain album with a catchy title track debuted.

“I still remember when ‘Hey Jude’ was released,” Azoff says. “I went to buy the album the day it came out at that little record store upstairs on Green Street.

“I had walked over from our little blue-jean bell-bottom retail store next to the Brown Jug called No Hassle. We were grossing more than Redwood & Ross.”

5. The man loves his Custard Cup — the Danville version, that is — ending an email to us with: “Have a Custard Cup for me.”

“When I left home to attend the U of I, we were living on Ridgeview Road, about a quarter of a mile down the street from the Custard Cup,” he says. “I must have consumed thousands of fudge sundaes and lemon custard, washed down with chocolate ice cream sodas. On hot summer nights, we would have round one, then speed across Lake Vermilion in someone’s father’s convertible with the top down, then right back to the Custard Cup.”

6. He’s practically the fifth member of The Eagles. When the band was inducted into the Rock Hall 20 years ago, the first person Don Henley thanked at the ceremony was “Irving Azoff, without whom we wouldn’t be here today.”

At which point Glenn Frey chimed in: “Well, we might still be here; we wouldn´t have made as much money.”

9. Just how big a player in the entertainment business is he?

In 2012, when Billboard magazine created its Power 100, he occupied first place.

“Azoff’s placement at the top of the list is due to his command of the biggest concert-promotion company, the largest ticketing company and the largest artist-management firm in the world.”

10. Best advice Azoff has ever been given? “Return every phone call and letter — or, email now.” (We can attest that he does).

11. Long before he worked in the bus­­iness, he caught the music bug.

First concert as a kid? The Beach Boys at Indiana Beach.

Most memorable concert growing up? “It was August 20, 1965,” Azoff says. “My dad and I drove to Chicago to Comiskey Park to see the Beatles.

“I remember the big Vox speaker cabinets up and down the first- and third-base lines. We sat on the third-base side and barely heard anything but screaming girls. But it was still amazing.”

12. Among the slew of awards he’s received over the years: 1980 Album of the Year, from the Academy of Country Music, for producing “Urban Cowboy.”

13. Azoff has his own IMDB page, having appeared in three movies as himself (two involving another famous act he managed, Neil Diamond) and produced 21 others (including 1999’s “The Hurricane,” 1998’s “Jack Frost” and 1982’s “Fast Times at Ridgemont High”).

14. Here’s Cameron Crowe, of “Jerry Maguire” and “Almost Famous” fame, writing about the 5-foot-3 Azoff for Rolling Stone in 1978:

“They call him Big Shorty, the man who rules the careers of the Eagles, Dan Fogelberg, Steely Dan, Jimmy Buffett, JD Souther and Boz Scaggs. Just thirty, he is the enfant terrible of the music business. To get his clients top dollar, he’ll rip up a contract, yell, scream, terrorize, stomp, pound and destroy inanimate objects ... gleefully. Many of his clients will spend their off-hours watching him ‘kill’ on the phone.”

15. A short joke from his early Eagles days, as told in a 2009 Wall Street Journal story entitled: “Can He Save Rock ‘n’ Roll?” — with the “he” being Azoff: “In the early ’70s, Mr. Azoff gave the famously mischief-prone guitarist Joe Walsh a chain saw, which became a regular part of the musician’s gear on the road.

“Later, during a tour supporting Mr. Walsh’s ‘The Smoker You Drink, the Player You Get’ album, one hotel couldn’t accommodate the two men’s request for connecting rooms. So Mr. Walsh used the chain saw to ‘cut a hole in the wall about as tall as the desk,’ says Mr. Azoff. ‘And he said: I made it just your size.’”

16. At the 2020 Rock Hall ceremony in Cleveland, Azoff will be the co-recipient of the Ahmet Ertegun Award, along with Jon Landau, best known for being Bruce Springsteen’s manager and producer.

The honor is bestowed upon “songwriters, producers, disc jockeys, record executives, journalists and other industry professionals who have had a major influence on the development of rock and roll,” the Hall says, with previous recipients including Quincy Jones, Berry Gordy and Dick Clark.

18. The moment Azoff knew he could make it in the music business? “Sold 900 tickets to a teen dance at the VFW hall in Danville!”

19. Upon receiving the Recording Academy President’s Merit Award during a “Salute to Industry Icons” on the eve of the 2016 Grammys, Azoff cracked to the crowd: “I like being a manager. ... Now more than ever, a shrewd manager is essential. Someone has to advise you on dry cleaners, restaurants, chartered jets and divorce attorneys.”

20. He believes the music world would be a better place without the invention co-created by two fellow former UI students — YouTube — “and all the others that use safe harbor to screw artists,” he told us.

As a counter-measure, Azoff in 2013 founded Global Music Rights Management, which manages licensing rights for artists. Its catalog includes the works of Prince (934 songs), John Lennon (204) and Bruno Mars (202).