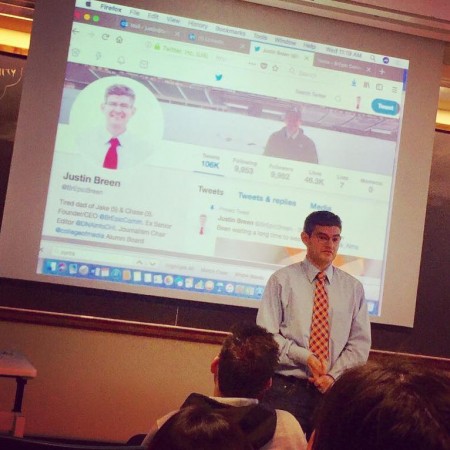 Do what you love to do and what you do best.

Your network equals your net worth.

Find at least two to three good mentors and listen to them.

Those are just a few of the guiding principles 1999 news-editorial journalism grad Justin Breen has come to discover — and put into practice — since launching his own PR firm on April 16, 2017.

In celebration of BrEpic’s 30-month anniversary, Breen created his list of the 30 things that have helped his Chicago-based business find early success, which he then shared with others.

And then came the surprising part.

“When I published this list, I couldn’t believe the amazingly positive reaction from people, especially other entrepreneurs,” Breen says. “Many incredible people said I needed to write a book based on this list — and they said they would read it — and my mentality now is, if enough great people tell people to do something, I’ll just do it.”

He’s kept close ties to the College of Media since graduation day, serving as the journalism chair of its alumni board for more than a dozen years and helping organize the annual Media Career Night, during which A-list alums come back to campus to speak to students and faculty.

Something else he’s realized both in those roles and as CEO of BrEpic Communications: “When I’m pitching stories to media markets around the world, it seems like there is always at least one U of I graduate working there. It’s a truly incredible network of extraordinary journalists.”

Many of them learned from the one of the best — former Washington Post Pulitzer Prize-winning investigative reporter Leon Dash, a member of the UI faculty since 1998.

“Professor Dash taught me the key components of great storytelling, and digging deeper for great feature angles,” Breen says. “I am forever indebted to him for his leadership and guidance.”