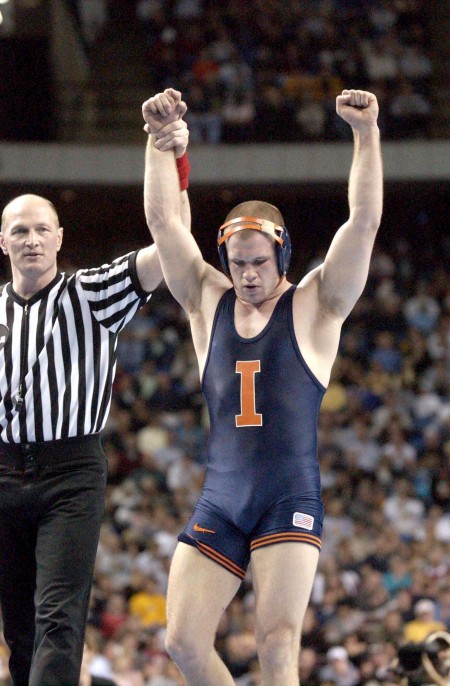 It’s not just the pins and wins Illini wrestling legend Matt Lackey remembers best from his time at Illinois.

“One of my more impactful memories wasn’t a celebration; it was after the worst loss of my career," says the Illini wrestling legend, who won an NCAA title in the 165-pound weight class in 2003.

“In 2002, I was a junior and made it to the NCAA finals, where I faced my rival — Joe Heskett from Iowa State. He was in his third NCAA finals in a row and a formidable opponent who I’d faced several times and never beaten.

"I was wrestling a great match and following my game plan we had laid out. With about 10 seconds left, we were tied 2-2. I figured I had one last offensive attempt left — I shot and he countered and scored with about three seconds on the clock.

"To come so close and come up short was heartbreaking.

“But what I remember even more was what my assistant coach — (now-head coach) Jim Heffernan — did for me. I made my way back through the tunnel and found a spot on the floor, sat down, and cried — a lot.

“Jim never said a word, but he sat with me. In the moment that I felt my absolute worst, he sat with me. I knew that he knew how I felt. There didn’t need to be any words. We probably spent 30 minutes there before he made me get up and head back into the arena.”