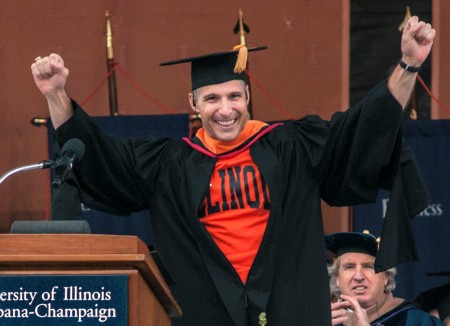 From walk-on defensive back to Illini football captain, from 12 years of NASA rejection letters to being on board for a 166-day round trip to the International Space Station, Mike Hopkins’ story is the stuff of legends.

He shared it with the UI’s graduating class of 2014, just two months after returning from the ride of his life — orbiting Earth 2,656 times in the Soyuz TMA-10M spacecraft.

John Mackovic gets some of the credit for Hopkins’ success in space.

“The workout regimen and really, my whole experience there at Illinois helped me get through the time in the microgravity environment,” says Hopkins ('91). “I know how to work out. I know how to push myself from those days on the football field. That translated directly into my time on the station.”

“Professor Prussing was my counselor, and I took a class from him as well. He just has a way about him that we can learn about. He is just very calm but very knowledgeable, very enthusiastic about what he´s doing, and it´s contagious.

“Coach Tepper and coach Steve Bernstein, the defensive backs coach, they really gave me my shot. They were the ones who put me on the field for the first time and gave me that opportunity. I´m very grateful for that. Both of them are also very motivational, and it was a pleasure to have the honor to play for them.”